Jeremy Denk’s recital in Philadelphia tonight, presented by the Philadelphia Chamber Music Society, was an astonishing tour-de-force: 24 pieces drawn from 600 years of music.

The very early music was of course the greatest novelty for a piano recital. Not knowing the original pieces in every case, I can’t say how much “arranging” Denk did, but I can say that the playing was colorful, with contrapuntal textures clearly delineated, and flexibly dancing rhythms.

The big extroverted pieces stood out, inevitably – the Bach, the Debussy, the Liszt/Wagner. But there were memorable smaller pieces as well – Stravinsky’s cubist evocation of ragtime, the profoundly inward Brahms, and the scintillating Scarlatti sonata among them. I’m glad to have heard the Stockhausen live for the first time; I wonder if I will ever hear it again?

Denk ordered the pieces wisely, creating not just a satisfying recital program, but a narrative arc, a through-line. For those of us who live in music, he told the story of our lives. I am grateful to have heard that story told with elegance, flair, and imagination.

– something interesting to me in the 1949 chart that accompanies this article is the listing of records in the “highbrow” row: “Bach and before, Ives and after”. I agree that this captures a certain sensibility, but I would never have guessed Ives would be a marker at that time. Stravinsky or Schoenberg or Bartok (records of music by the latter two are depicted in the chart), but Ives in 1949? True, the Concord had premiered in 1939, the Pulitzer was awarded in 1947. So maybe these brought him enough recognition to be cited in a chart of this kind? I don’t know what the Ives discography looked like at that moment, maybe there were more records of his music in 1949 than I would have thought.

– to make up for the lack of fresh posts on Think Denk, here is a recent piece by Denk on Ives, and here is an older one on Bach. The Bach score you will want to refer to is here.

– Hayes Biggs has a nice post on Mario Davidovsky and the Composers Conference here.

Congrats to Jeremy Denk and Vijay Iyer on their MacArthur Fellowships. These strike me as fine choices.

However… correct me if I am wrong, but I think it has been quite a while since a composer of concert music was awarded a MacArthur, no? Even though there are a couple of music fellowships every year…

– John Amis on two new Britten biographies. There are some choice anecdotes in the post; for example, Amis describes sitting with Erwin Stein at the premiere of Peter Grimes in 1945, an amazing thought.

– as an appendix to my Denk/Ligeti post, here is Denk coaching Dvorak for the Chamber Music Society of Lincoln Center.

– Guthrie Ramsey, my colleague at my day job, has a revamped website. Check out the substantial series of posts he did relating to his course on African American music – here‘s the first one. His new book on Bud Powell has just come out.

Author of the few music blogs you really need to have on your bookmark bar, pianist Jeremy Denk talks about and plays Ligeti:

Some random links to be visited by the light of the Advent Wreath, and after considering these meditations on the O Antiphons:

– here’s a serious procrastination aid: the National Jukebox at the Library of Congress. (via George Blood.)

– I’ve been thinking more about my Carter/jazz musician post. Though I still think it is true that you could assemble a quite decent jazz combo from among the members of most American symphony orchestras, it is even more likely that the folks capable of Carter’s solo and chamber music will have some sort of jazz literacy. Consider this post by Davy Rakowski where he describes confirming that Amy Briggs knows the changes to the interlude of Night in Tunisia. In the other direction, surely Uri Caine could nail a Carter piano piece. His album where he performs with the Arditti Quartet (known as Carter advocates) will make you think more about the intersections among Carter, high modernism in general, and jazz.

– The inimitable Jeremy Denk writes about the Goldberg Variations on Deceptive Cadence.

Here are some pictures from last week’s New York New Music Ensemble concert at Penn. The performance was superb, at times astounding. All the pieces had merit – I was especially struck by On That Swirl of Ending Dust by master of electronic media Eric Chasalow. The piece combined Eric’s exquisitely crafted electronic sounds with the live ensemble in tight synchrony. There were hints of jazz in the second movement, while the third movement was a quiet ritual, with bits of spoken text in the electronic component that made me think of a sober family gathering. Rand Steiger’s exuberant tribute to Elliott Carter, Elliott’s Instruments, enfolds fragments from an array of Carter’s own pieces. It was interesting how one could still recognize references to essentially athematic music. Yiorgos Vassilandonakis’s Quatuor pour la fin d’une ère evocatively explored liminal sounds, a dreamscape not quite in focus.  Cloud Earth by Pulitzer Prize winner Zhou Long was less densely worked than some of the other music on the program. There were imaginative textures here, as well as a little too much wood block for me.

Here are (l to r) Linda Quan, Steve Gosling, Chris Finckel and half of Jean Kopperud in rehearsal: 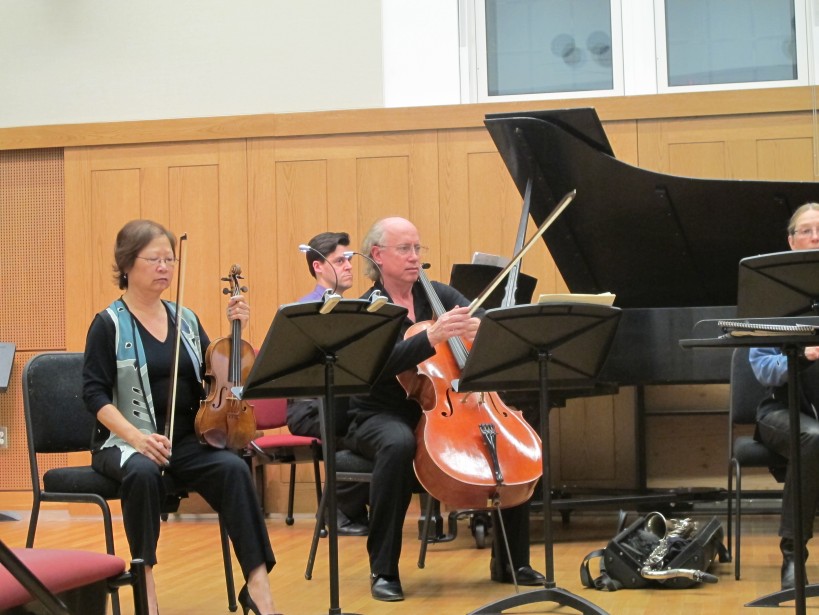 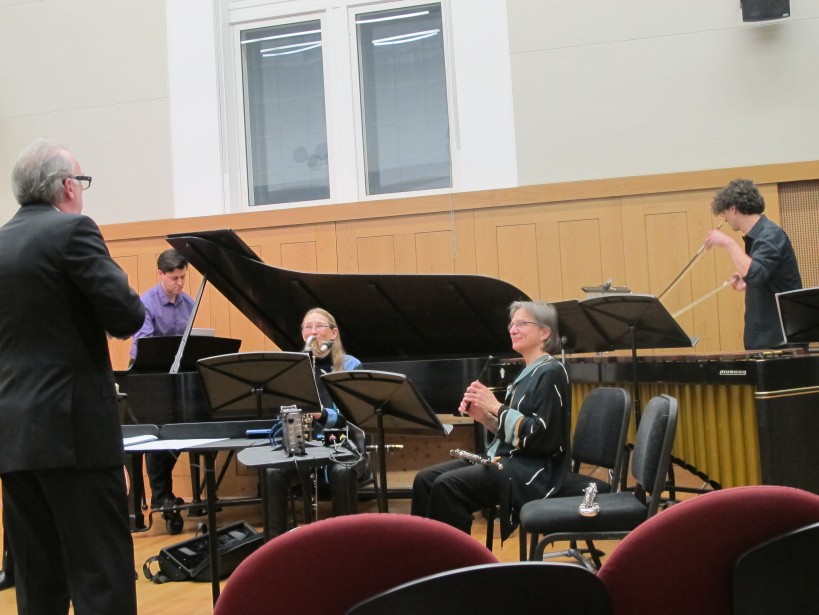 and the band bowing after the show: