– The inimitable Jeremy Denk writes about the Goldberg Variations on Deceptive Cadence.

Here are some pictures from last week’s New York New Music Ensemble concert at Penn. The performance was superb, at times astounding. All the pieces had merit – I was especially struck by On That Swirl of Ending Dust by master of electronic media Eric Chasalow. The piece combined Eric’s exquisitely crafted electronic sounds with the live ensemble in tight synchrony. There were hints of jazz in the second movement, while the third movement was a quiet ritual, with bits of spoken text in the electronic component that made me think of a sober family gathering. Rand Steiger’s exuberant tribute to Elliott Carter, Elliott’s Instruments, enfolds fragments from an array of Carter’s own pieces. It was interesting how one could still recognize references to essentially athematic music. Yiorgos Vassilandonakis’s Quatuor pour la fin d’une ère evocatively explored liminal sounds, a dreamscape not quite in focus.  Cloud Earth by Pulitzer Prize winner Zhou Long was less densely worked than some of the other music on the program. There were imaginative textures here, as well as a little too much wood block for me.

Here are (l to r) Linda Quan, Steve Gosling, Chris Finckel and half of Jean Kopperud in rehearsal:

and the band bowing after the show: 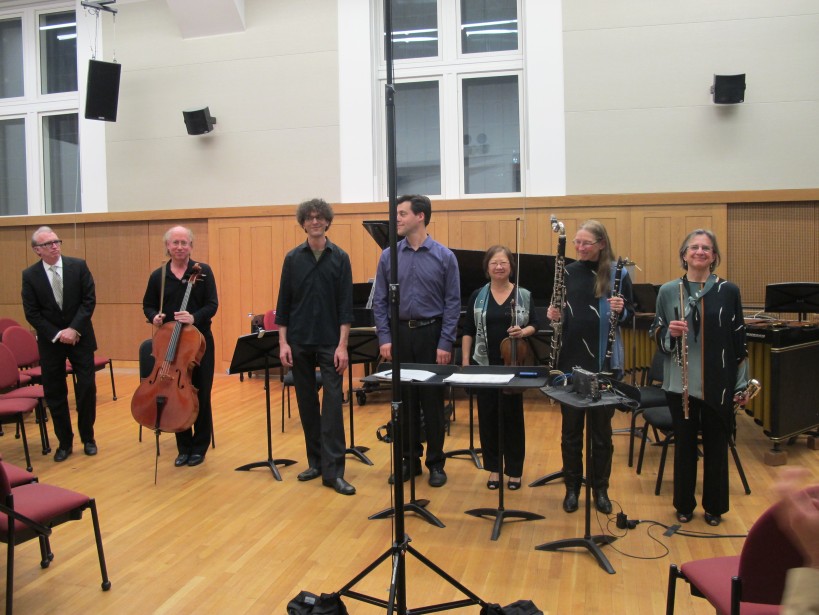