I was remiss in not posting prior to recent performances of music by my Columbia classmate Hayes Biggs. In the first week of March, Hayes had two premieres in New York: a motet called Goe, Lovely Rose, performed by C4 (the Choral Composer/Conductor Collective); and a new work for Rolf Schulte, violin and Stephen Gosling, piano, called Inquieto (attraverso il rumore). I’ve listened to a recording of the new violin and piano piece, and Hayes hit the mark with a brilliantly virtuosic piece that made good use of his formidable performers while not skimping on musical depth.

You can check out Hayes’s music at his SoundCloud page. I previously wrote about Hayes here, here, and here, and there is a video interview with Hayes here.

– something interesting to me in the 1949 chart that accompanies this article is the listing of records in the “highbrow” row: “Bach and before, Ives and after”. I agree that this captures a certain sensibility, but I would never have guessed Ives would be a marker at that time. Stravinsky or Schoenberg or Bartok (records of music by the latter two are depicted in the chart), but Ives in 1949? True, the Concord had premiered in 1939, the Pulitzer was awarded in 1947. So maybe these brought him enough recognition to be cited in a chart of this kind? I don’t know what the Ives discography looked like at that moment, maybe there were more records of his music in 1949 than I would have thought.

– to make up for the lack of fresh posts on Think Denk, here is a recent piece by Denk on Ives, and here is an older one on Bach. The Bach score you will want to refer to is here.

– Hayes Biggs has a nice post on Mario Davidovsky and the Composers Conference here.

Not much posting happening lately as I am pushing to finish up the piano consortium commission. Three movements are complete; two remain – the first and last in the set. The opening movement is nearly done: a harsh, dark chorale, dark in register, bitter in affect, with ornaments that mutter or sweep upward. There will be fanfares and a toccata for the finale.

A few items before I go back to work:

– my colleague Guthrie Ramsey has been writing a series of very substantial posts springing from his course on African-American music – the first one is here. He also has a guest post by Penn grad composer Erica Ball, writing about a recent visit to Penn by Brett Sroka and his group Ergo.

-the fine composer Hayes Biggs (a friend of mine from Columbia U days) has redone his website – there’s audio and more to explore.

I’ll be back after the piano piece is done…

-I just came across a nice write-up about the Mendelssohn Club’s disc that includes my Fire-Memory/River-Memory. A relevant portion:

James Primosch’s “Fire Memory/River Memory” has a more choral/symphonic through-composed quality. The music has a harmonically more adventurous palette and well crafted choral-symphonic sonances. Of the three works, this one has the most sweeping flow to it. It revels in suspension and release, choral part writing that is set off very effectively by poetic orchestration, a solo violin part that weaves in and out of the neo-impressionist orchestral light and shadow. The final of the two movements has some fireworks of an orchestral sort and more of the beautiful choral writing that permeates the work as a whole.

– Very fine composer and good friend Hayes Biggs is part of a Kickstarter campaign in support of a recording project by C4, the Choral Composer Conductor Collective. I wrote about Hayes’s music here and here, and there is a sample of his work at C4’s Kickstarter site.

– My colleague Steve Mackey blogs about The Rite of Spring.

– Read this in connection with Hiroshima and Nagasaki days.

My friend from back in my Columbia U days, Hayes Biggs, has posted video from his Manhattan School of Music faculty recital that took place earlier this season. The superb team of Susan Narucki, soprano, and Christopher Oldfather, piano, premiered Hayes’s Psalms, Hymns & Spiritual Songs, and the very fine Avalon Quartet offered  String Quartet: O Sapientia/Steal Away. Here is a sample of Narucki and Oldfather; find more here and here.

I was in NYC last night for a program at Manhattan school featuring two impressive pieces by my Columbia classmate Hayes Biggs – the premiere of a song cycle called Psalms, Hymns and Spiritual Songs, with Susan Narucki, soprano, and Christopher Oldfather, piano, and a string quartet subtitled O Sapientia/Steal Away. I previously wrote about the quartet here, so in this brief post let me just say the cycle was terrific, sustaining interest over six substantial songs that set a wonderful variety of texts. These included a Psalm excerpt as well as a 17th century metrical version of another Psalm and poems by George Herbert, Sri Aurobindo Ghose, Jane Kenyon and Gerard Manley Hopkins. Hayes has succeeded in doing something many composers of our generation attempt (but don’t always achieve): to truly integrate tonal materials into a broadly based language that can be dissonant or consonant, triadic or not, as the expressive needs of the moment dictate. This doesn’t involve any lack of rigor – Hayes’s contrapuntal instincts ensure that. There may be some traces of Britten or Ives in the musical language, but the songs struck me as very fresh and personal. The performance was superb, with Susan not just offering a lovely, clear, and true sound, but putting that sound at the service of varied expression and strong emotional impact. I hardly had to refer to the printed program, given the fineness of her diction. Christopher dependably does several impossible things on every page he plays – rhythmic subtleties, perfectly balanced chords, wide-ranging colors, sensitive coordination with his soloist – and all with a minimum of fuss. I want to write more about the songs, but for now here is a snapshot from after the concert, with (L to R) the members of the Avalon String Quartet, Susan Narucki, Hayes Biggs, and Christopher Oldfather. 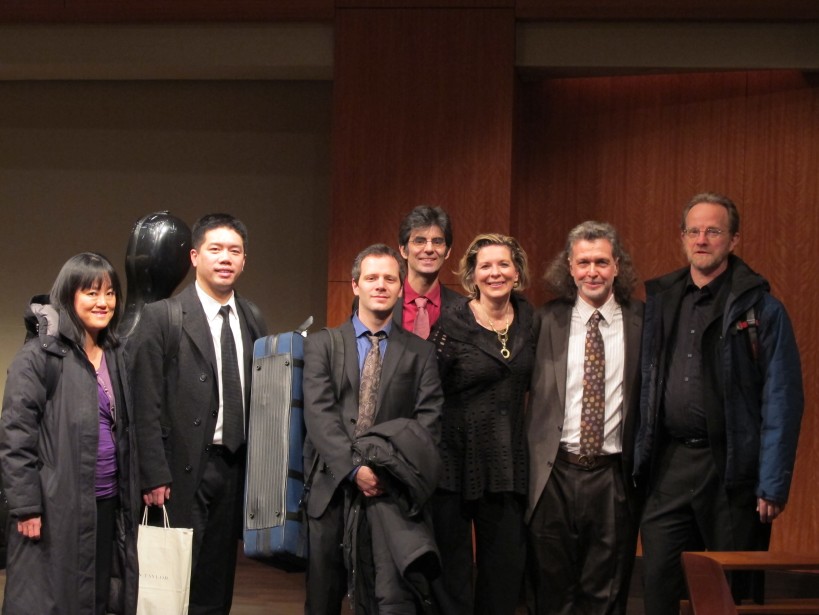 – New music choir The Crossing offers three performances of Kile Smith’s Vespers, collaborating with Piffaro, The Renaissance Band. I don’t know a better contemporary piece for old instruments – for that alone the work is a remarkable achievement. But instrumentation aside, this is exceptionally beautiful music. January 7 and 8 in Philadelphia, January 9 in New York, details here.

– Eric Chasalow’s new horn concerto will be heard at the Southwest Horn Conference in Phoenix on January 14, and in Boston at a BMOP concert, January 27. Eric is perhaps best known as a master of the electronic medium, but his acoustic music is just as superb.

– There will be an evening of music by Hayes Biggs at Manhattan School, January 15. I earlier wrote about the Avalon Quartet’s recording of Hayes’s touching O Sapientia/Steal Away here. Update: more info about the concert here. Susan Narucki and Christopher Oldfather will offer a new song cycle.

– The seventh and final volume of George Crumb’s American Songbook will be premiered by Orchestra 2001 on January 28 and 29 in Philadelphia.

C4 – the “choral composer/conductor collective – offers two performances this week including a new setting of Hopkins’ “The Caged Skylark” by Hayes Biggs, as well as  “Ecstatic Meditations” by Aaron Jay Kernis, “The Hildegard Motets” by Frank Ferko and works by Jonathan David, Michael Dellaira, John Harbison, Robinson McClellan, and Tarik O’Regan. Here are the particulars:

The highlight of the newly released Avalon String Quartet CD on Albany is O Sapientia/Steal Away by Hayes Biggs. Hayes was a colleague of mine in the Columbia doctoral composition program. I have long felt his music deserves wider recognition; perhaps this disc can help make that happen.

The compound title of the piece refers to its sources: Hayes’s own motet on the Advent antiphon “O Sapientia” (“O Wisdom that proceeded from the mouth of the Most High, Come and show us the way of prudence.”) and the spiritual “Steal Away” (“Steal away, steal away, steal away to Jesus”).  These are woven into a compelling narrative that plays continuously. The piece begins with darkly charged chords, starting from e-flat minor, which frame more lyrical music, including the “Sapientia” material. A scherzo interrupts, “obsessed” as the composer puts it, with repeated notes, but also including witty references to similar gestures in Beethoven and Mozart quartets. The material of the first part returns, yielding to a disconsolate meditation on “Steal Away”, hauntingly tentative at first; later, more lyrically extended. The piece ends with tender, high register harmonies, imbued with the intervalic colors of the “Steal Away” melody – essentially tonal harmonies, like the piece’s opening, but seen now in a very different light, a world away from the intense, brooding sounds with which the piece began.

The style of the piece is not easily categorized, perhaps occupying a spot a bit to the left of late Britten. Such comparisons are inadequate; Hayes’s language is his own. I found the form of the piece engrossing, the harmonies varied and telling, the string writing idiomatic – and the emotional content powerful.

There are so many fine young string quartets these days that the Avalon may have not yet come to your attention. It should. They play the Biggs piece with passion and precision, sensitively varied colors, and impeccable pacing.

This disc includes music of interest by David Macbride, Stephen Gryc and Ethan Wickman, but it is Sapientia that most strongly continues to claim my attention.