The Mendelssohn Club of Philadelphia had a lovely celebration in honor of its retiring music director Alan Harler last night – a big crowd, good food, a touching video presentation – and the announcement of a set of four commissions for next season. “Alleluias for Alan” will be a set of new pieces setting that word, or using that word prominently, to be premiered at next season’s Mendelssohn Club concerts, led by new music director Paul Rardin. I will be one of the four, along with Jennifer Higdon, Andrea Clearfield, and Robert Maggio. It’s a great way to honor a conductor who not only led superb performances of standard repertoire over the years, but gave 58 premieres in 27 seasons!

While there are certainly pieces that set the single word “alleluia”, such as this and this, I am wondering whether setting that single word or setting that word plus a few others – perhaps a few psalm verses – might be more practical for giving the piece a life after this performance. 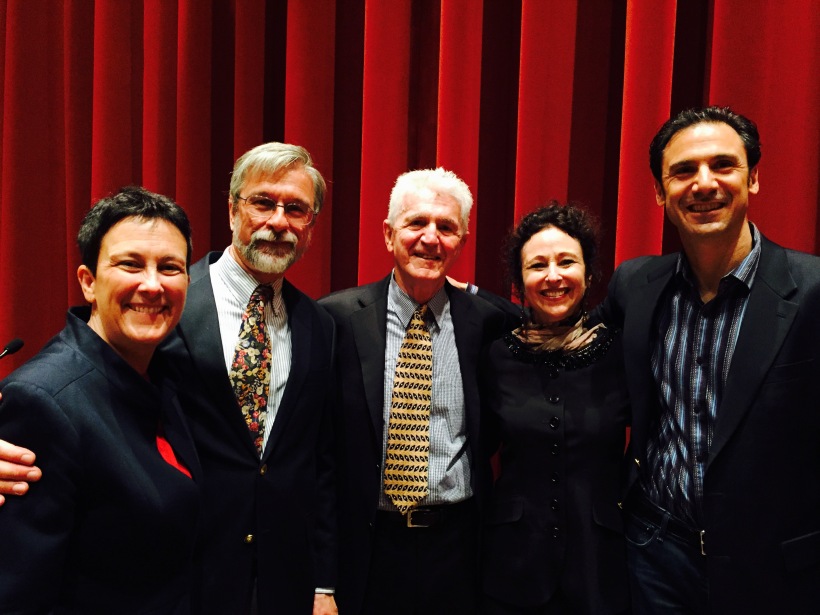 Go here for a Mendelssohn Club cd of works by myself, Jennifer, and Andrea. 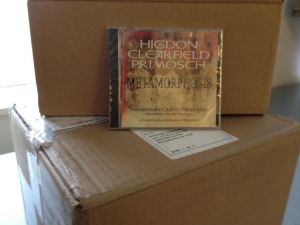 I’m delighted to report that the Mendelssohn Club of Philadelphia’s new CD Metamorphosis has been released on Innova. The album includes choral pieces by Jennifer Higdon, Andrea Clearfield, and my own Fire-Memory/River-Memory. I wrote about the project and the piece here and here. (Innova is having trouble with its website at the moment, will pass along an update when I can.) Photo borrowed from the Mendelssohn Club Facebook page.

Not a lot of posts lately, as I have been occupied with recording related work. I recently met with Alan Harler, director of Philadelphia’s Mendelssohn Club, at the studio of Joe Hannigan to go over a live recording of my Mendelssohn Club commission Fire-Memory/River-Memory (more about the piece here.) A run-through of the piece had been recorded as well, and the idea was to touch up the performance recording with patches from the run-through as need be. However, what we ended up doing was more about adjusting the performance recording rather than splicing in bits from the run-through. Joe was able to work a good deal of digital magic to clean up and improve the live recording. This was no small challenge, given that the recording was made in the cavernous chapel at Girard College, with a long decay that may be desirable for the organ that is based there, but not for choir and orchestra. While Joe couldn’t dry out the sound, he was able to improve the balance of the orchestra. He also adjusted the pitch at a moment when the women of the choir and a horn entry are juxtaposed – I don’t know if the women were low or the horn was high, but it got fixed. Especially impressive was the way Joe could excise bits of noise from the recording. A cough during the soft chime note that ends the first movement of my piece was removed not by splicing, but by filtering. Joe used a piece of software that provided a graphic image of the overtone content of the sound. You could then select a portion of the signal and attenuate or remove it. Joe was able to remove the high frequencies of the cough while leaving the sound of the chime intact. The software served as a sort of pinpoint band reject filter. All of this wizardry is old news, I suppose, but the relative ease with which such things are done remains impressive for those of us old enough to know how to use a splicing block.

Along with F-M/R-M, the Mendelssohn Club disc will include Jennifer Higdon‘s On the Death of the Righteous and Andrea Clearfield‘s The Golem Psalms, so I am in good company. The album will be released later this year.

I have also continued to work on mapping edits for a disc of vocal music with the 21st Century Consort. I must say I find it a challenging task. How to pick between two great takes? What to do when Take A has problem X, but Take B (of the same passage) has problem Y – and you’re not sure where a practical edit point might be? Some of my colleagues say they love to do this kind of thing because of the control it gives them over the final result. Me, I find it paralyzingly difficult to make the necessary decisions.

It helps that the raw material is so good, what with the splendid players in the Consort, Christopher Kendall’s conducting, and singers Susan Narucki and Bill Sharp. And it also helps to be working with some real pros in the studio. George Blood is helping with editing the Consort recordings, while the man who did the recordings themselves, Curt Wittig, will do the mixing, cleanup, and so forth. (Go here to read about Curt as well as the members of the Consort.) Curt and I go back a long ways, including his work on the record I made with Lambert Orkis of George Crumb’s Celestial Mechanics (reissued not so long ago on Innova). I can’t say exactly when this vocal disc will come out, but progress is definitely being made.

The planned disc will include four pieces. Holy the Firm, on texts of Denise Levertov, Susan Stewart, Annie Dillard, and John Climacus was originally written for Dawn Upshaw and Gil Kalish who premiered it back in 1999. I made the chamber ensemble version for the Consort, and did the same with From a Book of Hours, a Rilke cycle. In this case, instead of expanding the instrumentation, it was a matter of reducing it, since the original version was an orchestral commission from the Chicago Symphony, who premiered it with Lisa Saffer in 2002. Four Sacred Songs, arrangements of old Latin hymns, was made for Voices of Change, and was based on a set of Three Sacred Songs originally written for voice and piano in 1989 and premiered by Christine Schadeberg and Christopher Oldfather. (I added a fourth song for the ensemble version since the set of three seemed too short to make it worth getting a group together.) Rounding out the album is Dark the Star, a baritone cycle that sets Rilke and Susan Stewart, plus a verse from the Psalms. This set was written specifically for the Consort and Bill Sharp and dates from 2008.

It’s remarkable that though I have been fortunate enough to have a bunch of CDs out there, only one has any vocal music, even though I have done a good deal of music for voice in recent years. So it will be especially good to have recorded documents of this side of my work, both for chorus and for solo voice.

All this comes on top of the recent release of the Prism CD Dedication, which includes my Straight Up. Read more here.

In 2004 I was one of 23 composers invited to write short pieces for a concert celebrating the 20th anniversary of the Prism Saxophone Quartet. I reached into my files and took the basic musical material from a chart I had written for my undergrad school’s jazz ensemble, enriched the harmony a bit, added some dissonant counterpoint and a little cadenza, and produced Straight Up. The title came from a frequent conversational interjection by a trumpet player I knew back then, roughly equivalent to “no kidding?”, or “are you talking to me straight?” – a  possible reaction to hearing the piece.

Prism has recorded those 23 pieces for Innova, and to celebrate the release of the CD, they will play them in concerts in Philly and NYC. The Philadelphia concert is at the World Cafe this Saturday, May 29 at 7; the New York edition is at The Stone, March 31 at 10.

The list of composers is nicely diverse with respect to style, age, and so forth – here’s the list:

(Hey, I went to a lot of trouble to get all those links, so start clicking.)

The season announcement for the Philadelphia Orchestra has come out. There are plenty of appealing concerts, but it is rather slim pickings for new music. From what I can see, next season includes:

-Yannick Nézet-Séguin conducting the Higdon Concerto for Orchestra, Dec. 8 through 11. This is the piece that helped rocket Jennifer to fame thanks not only to its intrinsic qualities, but to the fact that it was premiered by the Philadelphia the week what was then called the American Symphony Orchestra League was having its convention in Philadelphia.

–Michael Torke’s Ash, with David Zinman conducting January 6 – 8. I think this is the first time Michael’s music is being played by the Orchestra.

And that is about it as far as living composers. This is another transitional year for the orchestra, of course, and I would guess there will be a little more new music as Yannick settles in – I certainly hope so. 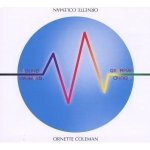 Monday’s announcement of the Pulitzer Prize in music (warm congratulations, Jennifer!) inspired me to pull out the CD that won the 2007 prize for Ornette Coleman: Sound Grammar.

I was struck by how tuneful the album is, even to the point of quoting other melodies. There are certainly plenty of edgy moments here, but if you only know Coleman from Intro to Jazz class, where he is the token scary, inscrutable avant-gardiste, this record presents a rather different picture. Listen to the hauntingly folk-like, archaic quality of Sleep Talking,  a meditation on the opening notes of Rite of Spring. Who do you think of as a saxophonist who would quote “Beautiful Dreamer” and “If I Loved You” in a blues solo? Maybe Dexter Gordon? how about Ornette Coleman?

The instrumentation of the album – Coleman is accompanied by two basses and drums – seems odd, but the two basses actually work out better than one might expect. Usually one is playing arco, the other pizz. The high register arco bass serves as another frontline instrument, often sounding in the alto sax register. The harmonic specificity of a keyboard or guitar would unhelpfully tie down Coleman’s pitch language, and the absence of a chordal instrument gives more sonic space for the two basses.

I posted a while back about the treatment of rhythm on Vijay Iyer’s Historicity – Coleman’s approach can be similarly rich. A common strategy here is to have pizz bass and drums playing at a furious tempo while Coleman lopes along at a more moderate speed, not precisely half time, but still feeling right.

Sometimes Coleman’s flexible treatment of intonation is merely gamey instead of expressive. And the last track on the album includes a freakout section for the two basses that overstays its welcome. But I can see why this disc won a major award.