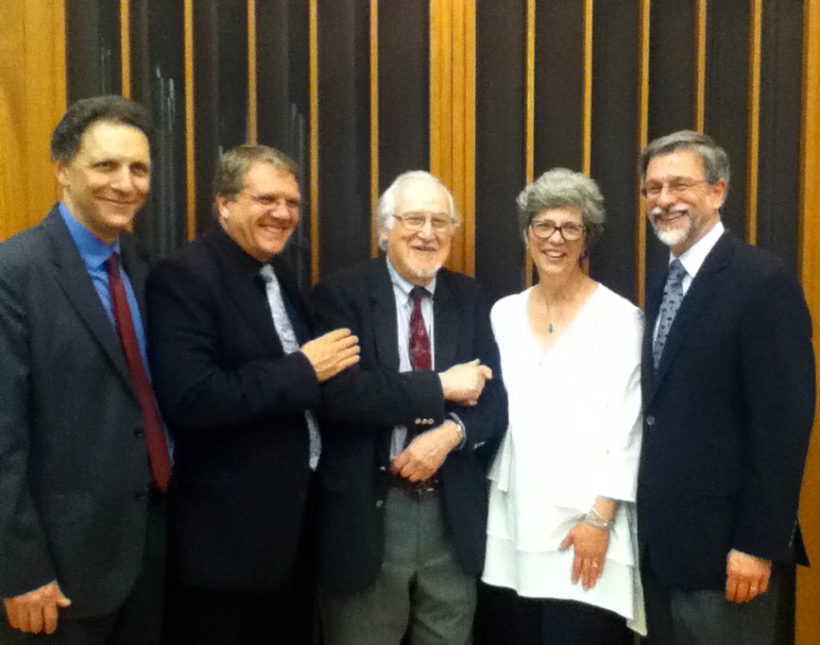 Here is the mentor and his mentorees: L to R, Philip Maneval, Yinam Leef, Richard Wernick, Melinda Wagner, and myself, taken after the April 18 concert of music by students of Dick Wernick held at the Settlement Music School here in Philadelphia.

Dick told the story of the graffito above the urinal in the men’s room in the Penn Music Department annex, the building where the faculty composers’ offices used to be. The inscription read: “Rochberg is the Father, Crumb is the Holy Ghost, and Wernick is the Son of a Bitch.” Yes, Dick was a challenging teacher, as some of us wrote in the program book for the concert. (Find the program notes here, here, here and here.) But there is more to the man than that, as I know from the kindnesses he showed me decades ago when I was ill with the same disease that took the life of his son. It would have been quite understandable if Dick went running in the other direction when he got word of my diagnosis. Instead, he was on the phone to me with advice, with names of doctors, with generous support. I count myself fortunate to know Dick Wernick.

And you will be fortunate if you check out his music! Try the recordings on Bridge of his concerti, or of his chamber music, or the one with big sonatas written for Lambert Orkis by Dick and myself. These are all splendid performances of Dick’s powerful, beautifully made pieces.

Speaking of performances, the players of the Daedalus Quartet, the Trio Cavatina, Elizabeth Hainen and Burchard Tang were superb in some very challenging music last week. These were high-calorie pieces, densely argued, with wide-ranging expressive demands. The performances were notable for their passion and sharply etched character. I was delighted with the performance of my quartet, and was astonished at how the Daedalus took on not just my piece, but three substantial works, all played with uncommon care. 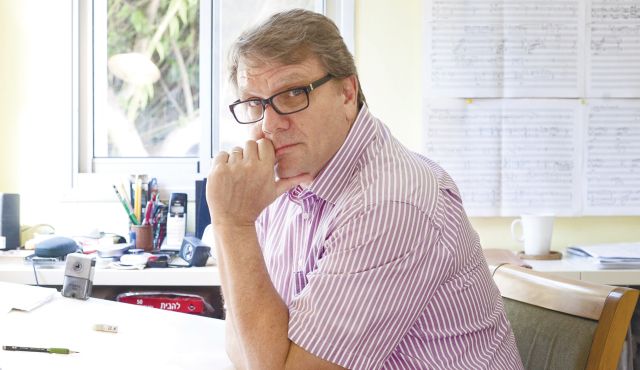 Yinam Leef is one of the leading Israeli composers of the day, and he was my colleague when we were both students at Penn at the end of the ’70s. His music is passionate and thoughtful, with influences from Middle Eastern traditions subtly integrated with European/American practice. I am lucky indeed to count him as a dear friend. His String Quartet No. 2 will be on the concert in honor of Richard Wernick on April 18 here in Philadelphia, played by the Daedalus Quartet. Here are his notes for next week’s program – comments both on studying with Dick and on his quartet.

On studying with Richard Wernick:

In 1979, Richard Wernick visited The Jerusalem Academy and presented his Visions of Terror and Wonder to the composition students.  The impact was so strong, and there was so much I didn’t understand that I knew I wanted to study with him.  Less than a year later, I was sitting in his office at Penn. He was silently reading a score on which I was working and suddenly pointed to a certain bar and jumped toward the piano. “Keep this low F in the basses for another two measures!” he exclaimed, while hitting the high F# in the high strings.  An entire section fell into place, proportions were set, the drama enhanced.

That was Wernick, as a teacher of graduate composition.  In a nutshell, he was an observer, first and foremost.  He would let you wander, carve your way for dozens of bars.  For weeks, lesson after lesson, he would observe the results of your writing, erasing and revising, reading the score silently, with occasional episodes at the piano.  If you were looking for someone to manage your materials, compliment you blindly or offer you quick solutions when you were stuck, Wernick was the wrong teacher for you. He intervened only when he was sure you knew where you were going, and then he helped you get there. He knew how to build a sense of trust and ultimately how to make a young composer trust oneself.

Wernick did not shy away from technical matters.  On the contrary, he enjoyed discussing those little secrets of the trade—pitch organization, canonic relationship, instrumentation, nuances of orchestration—these are all part of composition, he said.  But his teaching went far beyond that.  It was about the wider idea of tonality; it was about the essence of polyphony, about proportions and form.  It was about the daring modernity in Beethoven, the genius abstraction of Bach, and the drama in Berlioz; he always found a convincing example from the standard repertoire when deliberating a question in a contemporary work in progress.

Along with this unique gift of knowledge, Dick and Bea Wernick offered us the gift of their precious friendship. They saw us mature and our kids grow.  Decades of letters, then emails, scores and CD’s crossing the ocean in both directions replaced by digital files.  Every new Wernick score has been another learning experience from this great master who, like a seasoned poet, uses less to say more, and we realize once again that there must always be a solid, strong foundation, called craft, that sustains everything else, both what we can describe and what is left for us to contemplate.

On String Quartet No. 2:

This work directly connects with my Elegy for harpsichord solo, composed in December 1990.  I later re-arranged it for string quartet, planting a seed for the future.  Upon receiving the commission from the Philadelphia Chamber Music Society to write a major work for the Colorado Quartet, it was clear to me that the Elegy would not only be included, but also serve as the point of departure for the compositional process of the longer, preceding movement.

Entitled “Dreams Interrupted”, the first movement does not follow any traditional formal scheme, but rather contrasts highly directional materials against floating, meditative ones; intense music against lyrical lines, which all keep recurring and referring to themselves.  It was not conceived as having to reach a single climactic moment or definite conclusion.  Energies spread and dissolve, as dreams come and go, disturbing, soothing or eluding us in an unexpected sequence. But still, I wanted to create the sense that somehow, behind these wandering changes and interruptions, there is a common, connecting thread.

While the original version of the Elegy was somewhat inspired by Louis Couperin’s monodic, improvisational manner, the change from harpsichord to quartet is significant, as it tends to enhance the inner polyphony and harmonic tensions.  Written in a modified ternary structure, it attempts to form a contemporary view on past ideals of a period long gone, and it leads, as the climax resolves, to a series of short quotations from J.S. Bach’s “The Art of Fugue”, which gradually disintegrate into the central motif of the work.  I now perceive them as glimpses of yet another elusive, distant dream.

The first short quotation is the tonal answer to the theme of Bach’s immortal work.  Its notes, A-D-C-(A)-G#, reversed in order and given a sharply different rhythmic profile, form the very opening gesture, the starting point of the entire work, closing the rather unique cycle of time in which the quartet was written.

Go here for a sample of Nami’s music; and here for a fascinating article about his work at the Jerusalem Academy of Music and Dance and about his daughter’s prominent role in social protests in Israel. 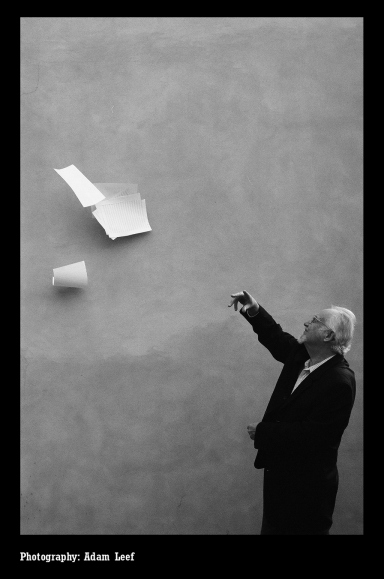 Next Thursday, April 18, is the Philadelphia Chamber Music Society‘s concert in honor of Richard Wernick, featuring music by four of his former pupils:

My third quartet was commissioned by the Philadelphia Chamber Music Society, and premiered by the Ying Quartet in 1999. Here is a program listing and note on the piece:

After writing a series of pieces that either set texts or relied on pre-existing melodies (old sacred tunes) as compositional resources, I set out to create a more autonomous, abstract world in my Quartet No. 3. My efforts yielded a somewhat unusual formal scheme: a theme and variations set is first interrupted by an anxious (“ansioso”) and expressionistic Fantasia; then resumes for a single variation, infiltrated by the gestures of the Fantasia. A viola cadenza follows, introducing a rondo-like finale. This attempt to cap the piece in a playful spirit is surprised by another reprise of the slow variation theme, this time in a simple unison statement.  The entire sequence plays without pauses and runs about 20 minutes.

Philip Maneval at PCMS requested that each of the composers write a note on their experience working with Dick as a student at Penn. Here is my note:

Some teachers of composition make it easier for the student to compose; some make it harder. Richard Wernick made it harder, and I am grateful that he did. Dick encouraged me to think deeply about fundamental musical issues, to work at making pitches truly matter, to hold myself to the toughest standards, to avoid simplistic solutions. Striving in his own composing for similar goals, he earned the right to be a kind of biblical prophet, issuing a radically uncompromising call to the highest artistic ideals. Thank you, Dick, for continuing to strive, for clinging to your vision of what a composer can be, for enriching us all with music of substance and expressive power.

That’s Dick in the photo above, taken by Yinam Leef’s son, Adam. It could be Dick the magician, conjuring up a new work – or sending it off into the world, in flight.

Leading Israeli composer and Penn alumnus Yinam Leef will be visiting Philadelphia next week, giving some classes and talks at Penn. I’ve known Nami since he and I were students at Penn in 1979. I love his music for its dark poetry and exceptional craft. He is far too little known in this country. Here is a video of a recent work: