Ravel – by Jean Echenoz, translated from the French by Linda Coverdale. This novel – a series of sketches, really – covers the last decade of Ravel’s life, especially the physical and mental decline of his later years. It’s a life full of acclaim, travel, carefully chosen clothing, Gauloise cigarettes, boredom and insomnia. The book’s tone is cool, selectively detailed (Adam Gopnik’s forward elegantly describes the author as a “fanatic miniaturist” but not a “minimalist”) and elegiac. It deserves a place on the shelf near James Hamilton-Paterson’s novel about the later life of Elgar, Gerontius, another book about musical genius in decline. 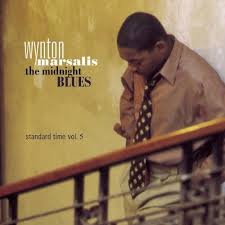 The Midnight Blues, Standard Time Volume 5. Wynton Marsalis. An album of melancholy standards with a blue chip rhythm section (Eric Reed, piano; Reginald Veal, bass; Lewis Nash, drums) and string orchestra arrangements by Robert Freedman. The arrangements are above average, with attractively dark harmonic colors (is that a 12-tone row at one point?), though inevitably when the strings swell up I am transported to the easy listening radio show my mother used to listen to on Sundays back in 1970’s Cleveland (“Journey into Melody” with Joe Black). Marsalis commands a million different colors and modes of articulation, with Armstrong-esque glissandi, and remarkable command of vibrato and fine distinctions of pitch. But an album of ballads is no easy thing to sustain, and Marsalis’s virtuosity gets the better of him at a few moments, with irrelevant displays of facility. Maybe the tag on “The Party’s Over” is supposed to suggest a desire for the party to continue?

Anthony Tommasini’s piece in today’s Times about the NY Phil’s programming of American music touches on a tricky subject. I’m glad, of course, to see the Philharmonic doing new music at all, and particularly glad to see American composers Marsalis, Rouse and Kernis on the bill for next season. And it does seem reasonable of Alan Gilbert to say that a longer view of the programming over a couple of seasons is necessary to get an accurate sense of his priorities. (Of course that point cuts both ways – he can’t exactly take credit for programming the Kernis which has been in the pipeline for some time.) The Philharmonic is a global citizen, and has a responsibility to bring the work of top composers like Adés and Lindberg from other countries to New York. That is an important service that nourishes our cultural life.

And yet – the Philharmonic also has a responsibility to be a cultural leader in this country and in New York City. Consistently commissioning and presenting a substantial amount of music by American composers is an essential part of that leadership. Here’s hoping that the next composer-in-residence with the Philharmonic will be an American, someone who can give an American face to American music at the Philharmonic.