I trust my scholarly colleagues at my day job will forgive me for posting a link to this.

The New Yorker is tweaking its graphic design and layout, starting with the event listings (“Goings On About Town”) in the front of the magazine. I’m not qualified to critique fonts, but I have noticed that there are fewer items in the classical music listings than there used to be with the old layout. Maybe its too early in the season to say for certain, but cutting the number of items listed is distressing. You know that the big players – the Met, the Philharmonic, etc. –  are never going to be dropped from the listings, which means there will be considerably less room for, say, that new music concert at Miller Theatre or  (le) poisson rouge. This is bad news for the classical music culture as a whole, including the big guys – narrowing the conversation doesn’t do anybody any good.

My other New Yorker item this week is this from an article about EDM in Vegas. One artist discussed is named Afrojack, and here he is working on his songs with a colleague:

According to the article, Afrojack earns $150,000 a night. I think my fee for an elementary music theory tutoring session just went up to $150,001. 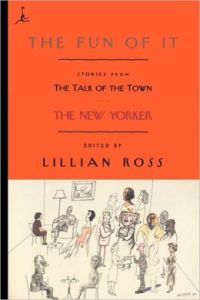 The Fun of It: Stories from The Talk of the Town, edited by Lillian Ross. What musician can resist a book where one of the items included begins:

“We were fortunate enough to be seated a few rows behind Rachmaninoff the other night in the Plaza ballroom when Theremin, the young Russian scientist, produced strange sounds, then tunes, and finally played Scriabin and Saint-Saëns by waving his hands gently at antennae on a box.”

Always Looking: Essays on Art by John Updike. This is a posthumously issued collection of reviews of museum shows, mostly originally published in The New York Review of Books or The New Republic. There are plenty of handsome reproductions, though the book is not the size of a coffee table tome; perhaps it’s something for an end table. The tone is that of a well-informed amateur who just happens to write as elegantly as John Updike. Artists discussed include Church, Monet, Miró, Degas, Klimt, Beckman, Magritte, Lichtenstein and Serra and more. The 20th century and contemporary artists are dealt with sympathetically, making me wonder what it would mean for music created during the same periods if a writer of Updike’s stature took an interest in it, and acted on that interest in print. Art didn’t need Updike – there is money in art – but music could have used him.

“Listening and wanting are intricately entangled, in ways that may evade any measure.”

Idea for story: Some beavers take over Carnegie Hall and perform “Wozzeck”. (Strong theme. What will be the structure?)

from “Selections from the Allen Notebooks”, by Woody Allen, as found in the volume Fierce Pajamas, an anthology of humor writing from The New Yorker.

Mr. Goldman played “Finlandia” with such feeling and attention to tonal detail that I dropped my Popsicle, and the lady alongside me, who was about to reach the bottom of her Cracker Jack box, held off searching for her prize until the end of the piece.

That is from a 1949 New Yorker review of a Goldman Band performance in Central Park, written by Philip Hamburger. I have associated that name with the The New Yorker for some time, but did not know Hamburger served as music critic for the magazine for a year until I read Friends Talking in the Night, an anthology of Hamburger’s sixty years of writing for The New Yorker. I highly recommend the volume, not just for the examples of music criticism, but for the widely varied writing on all manner of topics.

Although not a musician, Hamburger’s writing about music is sensitive and thoughtful, lively and engaged. He is interested in new music, commenting approvingly on a Koussevitzky program with the BSO that included works by Foss, Schuman, Cowell, Barber, and Piston (with all the composers present). He is also uncommonly funny.

I’m afraid Miss Pons has reached a point, operatically, where she should be seen and not heard. She was admirably decorative, but when it came to the singing – well, let’s talk about network time and package deals.

The rest of the program was scarcely more satisfying. Mr. Münch gave us Lalo’s overture to “le Roi d’Ys, ” which, as far as I’m concerned, could be renamed “The Ride of the Rockettes”.

Mr. Berglun sang Jokanaan, the Prophet, with superb dedication, but physically he was so detached and immobile that I felt matters had changed hardly at all when the Prophet’s head was served up, toward the close of the ceremonies, on a platter… Miss Thorborg, as the cold-blooded mother of Salome, was adequately depraved.

There are also interesting tidbits to be picked up by reading reviews from 60 years ago. Who would have thought that Britten’s “The Rape of Lucretia” was produced at the Ziegfeld Theatre in New York in 1949, with the role of Lucretia taken by… Kitty Carlisle???

In a recent New Yorker article about a theatrical adaptation of The Great Gatsby that involves reading the entire novel on stage, Rebecca Mead reviews the various theatrical and cinematic adaptations of the book that have been done over the years. She includes various absurd failures, but fails to mention the most successful adaptation of the piece: John Harbison’s 1999 opera, premiered at the Met late that year. Maybe she knew about the piece and left it out because the excellence of Harbison’s work would conflict with the point she was trying to make about how impossible the novel is to adapt. More likely, I fear, she simply didn’t know the piece existed. Again, to repeat a motif often found in these posts – one of the musics I love has been marginalized – in this case, pushed right out of the picture.

You can hear Gatsby on CDs that the Met is selling as part of a big 32-disc set honoring James Levine on his 40th Anniversary with the company. You have to buy the whole set, no individual items for sale just yet. Too bad the piece didn’t get included in the Levine DVD set that has also been issued – though that does include both Berg operas, Weill’s Mahagonny, and Corigliano’s Ghosts of Versailles. Hear Lorraine Hunt-Lieberson sing an excerpt from Gatsby here.