Miranda Cuckson has a reminiscence about the late Mario Davidovsky on the New Music Box website.

Here is a video of excerpts from a 2006 New Music Box interview with Mario:

And another interview, this one from an archive of interviews with important figures in electronic music created by Eric Chasalow and Barbara Cassidy:

Mario Davidovsky passed away earlier today. He was my teacher, mentor, inspiration, and friend. I will write more soon, but for now, here is Susan Narucki with Speculum Musicae, performing the last movement of Mario’s Romancero:

UPDATE: the NY Times obituary for Mario is here.

The very first sound we hear in Mario Davidovsky’s String Trio – a short sharp attack in the viola combined with the same notes sustained in the violin –  reflects the composer’s pioneering work in the medium of electronic music. In that opening sound he creates a composite gesture just as he constructed such gestures by splicing together bits of magnetic recording tape in the Columbia-Princeton Electronic Music Center beginning in the early 1960’s. Building up a musical discourse from elemental particles became Davidovsky’s practice when writing purely instrumental music as well. The lightning speed of articulation, the rapidly shifting dynamic levels, the sense of a musical space in constant flux, all of which we hear in the String Trio, can be traced to Davidovsky’s work in the electronic medium.

But there is more to this music than an acoustic replication of electronic idioms. The hard-edged intensities of this music also reflect an urban sensibility, a response to the experience of living in New York City as Davidovsky has for most of his life. This aspect of his music requires a super-charged playing style with exaggerated dynamics, and razor sharp rhythms. In contrast, amid the stinging attacks, flurries of activity, and sudden swells, there are moments in this music of the utmost delicacy, singing lines that intersect in what composer Ross Bauer has characterized as an “almost Renaissance purity”.

The pleasure of Davidovsky’s Trio springs from attending to the play of forms, the way fragmentary elements are deployed over time, how they are juxtaposed, layered, and transformed into one another. In its fiery vehemence, its scintillating exuberance, and its extreme tenderness, Davidovsky’s Trio offers us an uncommonly eloquent musical narrative.

Davidovsky’s String Trio was commissioned by the Peggy Guggenheim Foundation and premiered in Venice in 1982 by members of the Arditti Quartet.

Here’s a recording of the Trio from a Bridge Records album. (Note that the image shown in the video is from some other album!)

–  Anna will be playing my Piano Variations. She was one of the students who shared in a performance of the piece in 2016, having had the work brought to her attention by Temple U professor Lambert Orkis. More about the piece here.

– there was a very strong performance by the Lark Quartet at their 30th anniversary concert in NYC this past Monday. After urgent, authoritative playing in the Debussy Quartet, they offered a premiere for string octet by Andrew Waggoner in which the original members of the Lark joined the current members. The piece, called Ce morceau de tissu, was striking for its fierce antiphonies and roiling textures. It was impressive how Andrew was able to maintain high energy in the piece; sustained fast music is no small challenge to write. After intermission, the Harbison String Quartet No. 6 had its NYC premiere. In four movements, the piece begins with the first violin placed some distance from the rest of the quartet, gradually arriving at a conventional playing location, and the “3 + 1” conception returns later, though the positioning of the player remains normal. It was interesting to hear this quartet and Harbison’s Presences two weeks apart; two chamber works for strings featuring concertante writing for a member of the ensemble, though Presences is mostly at a higher dramatic temperature than the quartet with its lyrical and dancing textures. Both works linger in the mind.

No less intriguing was a chance to hear the Harbison Sixth in close juxtaposition with the recent Mario Davidovsky Sixth Quartet as played by the Juilliard Quartet on Sunday here in Philadelphia.  Both memorable pieces by senior masters, but with very different languages, of course. Mario’s piece is called Fragments, and its essentially athematic discourse relies on the careful deployment of characterful elements that, in Mario’s words: “do not offer the necessary pitch/rhythmic information to denote them clearly as motives, but can be described in basic ‘expressive’ terms as being very fast, percussive, or lyrical, etc.” These fragments are combined, juxtaposed, and transformed, with the result being mercurial, dramatic, playful and poetic by turn. The writing is animated by vividly alert textures that retain the influence of Mario’s days in the electronic music studio; at times it is as though an electronic component is embedded in the purely acoustic piece. The work was brilliantly played by the Juilliard on a program that also included the Mendelssohn a minor quartet and Beethoven Op. 130, with the Grosse Fuge – whew!

Here’s John Harbison with Andrew Waggoner and Kathryn Lockwood of the Lark after the concert: 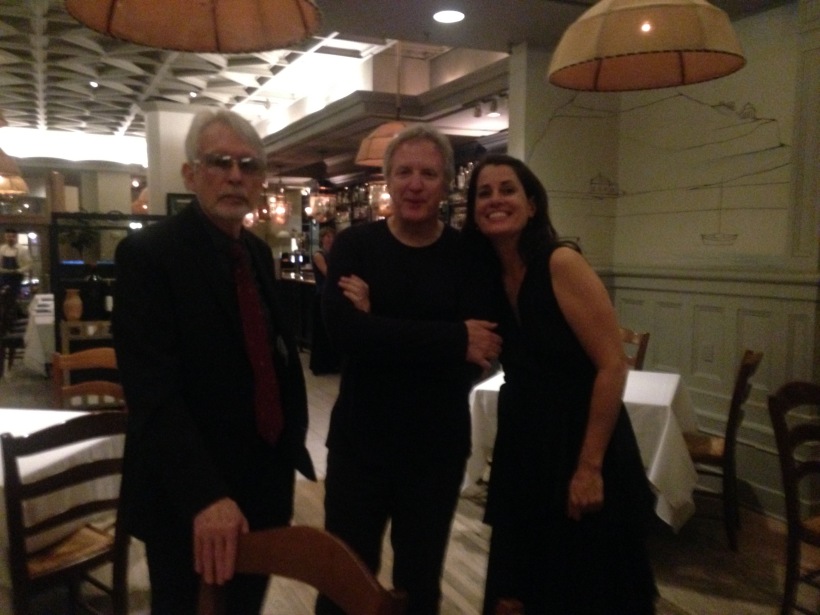 and Andy with his wife Caroline Stinson, cellist in the Lark: 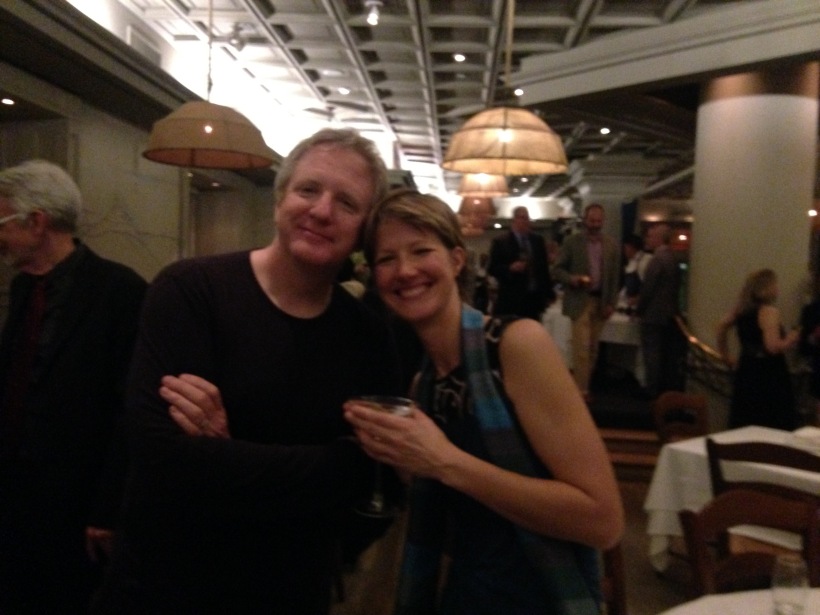 – I visited the Guggenheim the morning after the Lark performance, and I strongly recommend their current show, filled with myriad strong pieces! I lingered at works by Pollock, Klee, many Kandinskys, a Bonnard (not normally one of my favorites), Mondrian, and many more. I found this Picasso especially moving, spending a long time looking at the supremely elegant curving lines:

You might complain that this is an “easy” work to like, compared with, for example, some of the Kandinskys in the show. But “easy” in art is never easy. 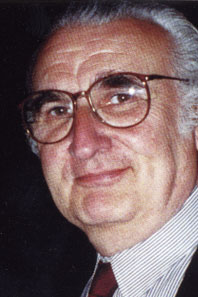 It’s a remarkable event: 10 of Mario Davidovsky’s masterful Synchronisms – works for live instrumentalists combined with pre-recorded electronic sound – will be performed on December 8 and 9 in Philadelphia at Holy Apostles & the Mediator Episcopal Church, 260 S. 51st Street. This has been organized by harpist Elizabeth Huston, and you can read more about the concert here. Like the evening of Berio Sequenzas that Elizabeth staged in 2014, this program will position the performers in various spaces throughout the church. Mario was one of the pioneers of the “instrument and tape” genre – folks call it “instrument and fixed media” these days – and nobody has done it better. His Synchronism Nr. 6 for piano and tape won the Pulitzer Prize in 1970. Here it is, played by Aleck Karis:

It’s a good day to rake leaves, but I want to take a break to say: 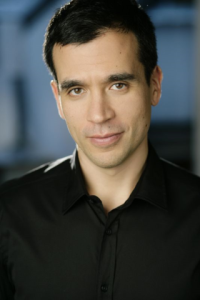 Poetry of Rilke and Susan Stewart, plus a verse from Psalm 116 – these are the texts I set in Dark the Star, a 2008 work for baritone, clarinet, cello, piano and percussion. The New York New Music Ensemble with soloist Thomas Meglioranza (at left) will perform the piece twice in early November. Here are the details: the first performance is in Philadelphia on Sunday, November 6 at 2 pm. The free concert will be in Rose Recital Hall, on the 4th floor of Fisher-Bennett Hall, located on the southeast corner of 34th and Walnut on the University of Pennsylvania campus. (Make sure your clock is set correctly, as Eastern Standard Time returns that weekend!) NYNME will repeat the program in New York the next day, November 7. The New York performance is at 8:30 pm, at the Tenri Cultural Center, 43a West 13th Street. Music by Melinda Wagner, Mario Davidovsky, and Augusta Read Thomas will round out the program.

I’ve been fortunate to work with the extraordinary musicians of NYNME for over 20 years. The rapport among these players is near telepathic, and their performances are electrifying.

Here is my program note on Dark the Star:

Composing this cycle of songs began with my discovery of three poems in Susan Stewart’s collection Columbarium that I knew I must set to music. The deep, dreamlike wisdom of these poems haunted me, just as I had experienced with Susan’s poem “Cinder” that had served as the fulcrum of my song cycle Holy the Firm. Eventually, texts by Rilke and an earlier setting I had done of a psalm verse were drawn into the gravitational orbit of Susan’s poems. I ordered the texts in a nearly symmetrical pattern, with two texts set a second time in versions that shadow their first readings. This is partly for the sake of the formal design, but, more importantly, to re-examine the poems in the penumbra of what comes before. Rounding the cycle in this way reflects not only the circles and repetitions in Susan Stewart’s texts, but also the way in which, as Rilke writes, the things we have let go of yet encircle us. The work was composed for William Sharp and the 21st Century Consort, who gave the premiere, with Christopher Kendall conducting.

Sample the Bridge recording of the piece on YouTube, with the forces for whom the piece was written:

ICE presented an all-Davidovsky concert last Friday at the Americas Society in New York, and the program covered a remarkable span of time. The earliest piece was the Chacona for piano trio dating from 1971, and the newest was from this year, a premiere for flute, clarinet, piano, percussion, and four strings called Divertimento No. 8, “Ambiguous Symmetries”.  This was Mario’s return to composing after a hiatus of several years, and although he described it in an intermission conversation has having an entirely different syntax from his earlier music, it still had the electric crackle, sly wit, and poignant lyricism for which his music is so admired. The program began with soprano Tony Arnold’s vivid rendition of Romancero, a set of four songs on anonymous Spanish texts. Here a mixed quartet of strings and winds frame the voice with alert gestures, or shadow it with plaintive musings. David Bowlin was a brilliant soloist in the Synchronisms No. 9 for violin and electronic sound, with the live and recorded elements merging into a hybrid “super-instrument”. It was beautiful to see the young players of ICE advocating for this music with such passionate commitment, and reassuring to know that the tradition of virtuosity called for by this body of work continues.

Here’s Mario during that intermission talk:

– I was sad to see that Frank Music has closed. I’ve not experienced any combination of internet resources that can compare with going into a shop, leafing through every page of a score, comparing it with another edition of the same piece, consulting with a knowledgeable salesperson about options, and fortuitously finding items that you didn’t know you needed, beyond anything an Amazonian algorithm can offer.

– an all-Davidovsky concert with ICE is coming tomorrow, March 13, at the Americas Society in NYC, including the premiere of a new piece.

– go here for a podcast in which Charles Rosen talks about Chopin, illustrating his points at the piano.

It was a fantastic concert of music by Mario Davidovsky in honor of his 80th birthday tonight at Merkin in NYC. There were several veteran performers on hand, players I first met in 1979 at the Composers’ Conference that Mario still directs, now at Wellesley College. All the musicians, longtime Davidovsky advocates or not, projected the scintillating and lyrical gestures of this music vividly, and with pinpoint precision. It was a pleasure to hear such commanding performances.

Hearing a string of Mario’s pieces in succession brought home to me just what a remarkable body of work he has created. The music is full of high contrast juxtapositions yet manages to convey a sense of long line. The point of view is consistently contrapuntal, but with aerated, economical textures. Always, there is an a exquisite sense of timing – none of these pieces outstay their welcome.

Here are a few pictures. Mario taking a bow, with cellist Chris Finckel at right:

Mario and I, after the concert: 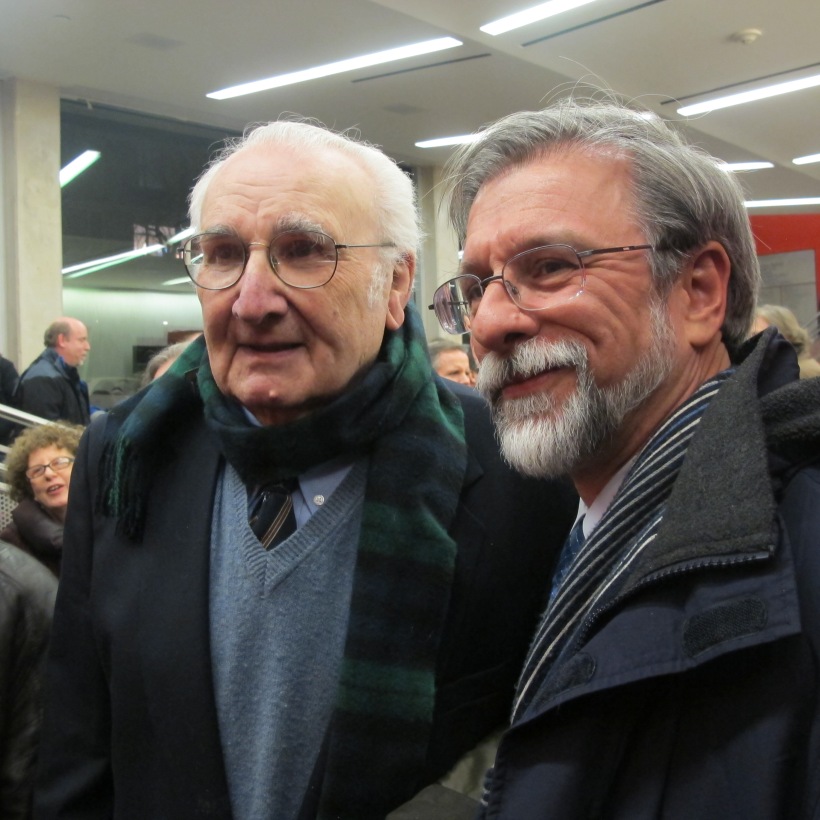 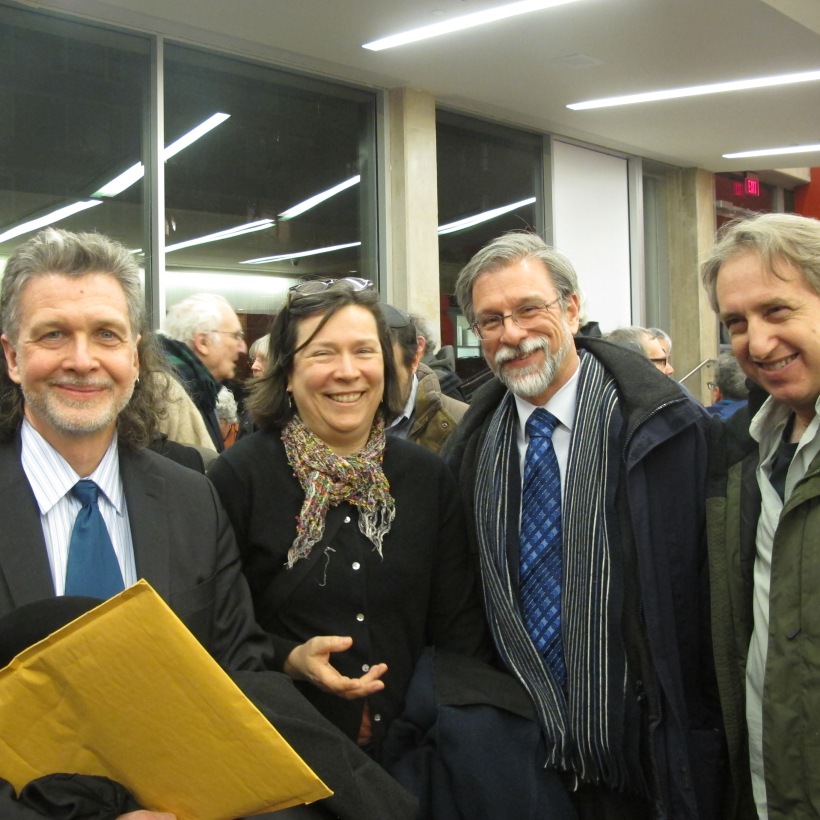 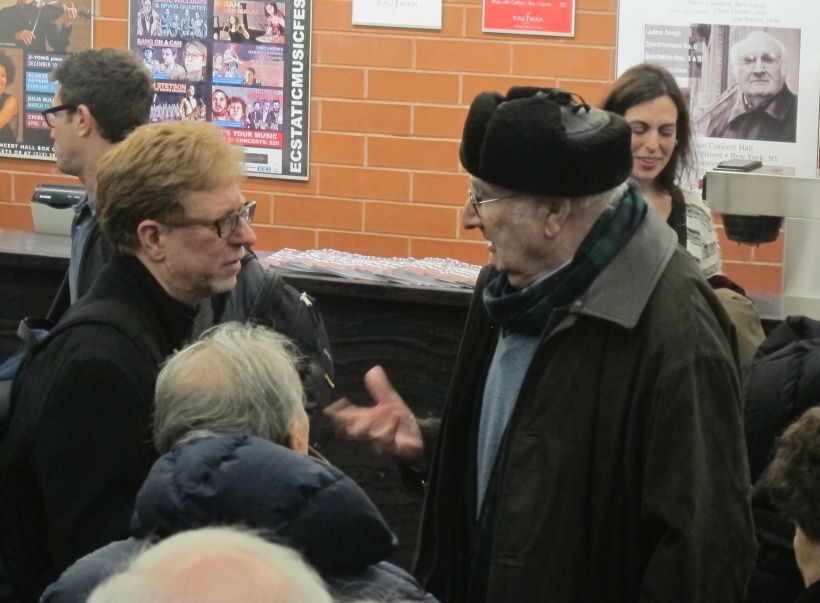