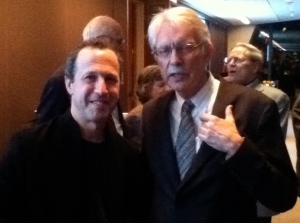 Last night I was at the first of two important Harbisonian Gatsby performances happening within a few days of each other (the other being this). The Albany Symphony’s appearance at the Carnegie Hall “Spring for Music” festival offered a program of Morton Gould’s Third Symphony, the Gershwin Second Rhapsody (with pianist Kevin Cole), and The Great Gatsby Suite. Harbison writes that he avoided including in the Suite music from the opera’s overture or its six principal arias, preferring to rely instead on the instrumental interludes and the stage and radio band sequences. The result is not just a succession of tunes, but a newly shaped musical narrative, freed from the narrative depicted on stage in the opera while retaining its DNA. The piece remains a suite, but this sense of a new narrative, plus the fact that it plays continuously save for a single break, means it has something of a symphonic flavor.

David Alan Miller, Albany’s music director, believes strongly in the Morton Gould Third, and to a great extent he is right to do so, for there are remarkable pages here of harmonic beauty and rhythmic verve. It’s a big-boned four-movement piece, of its time in its neo-classicism, dissonanted tonal vocabulary, and jazzy gestures. The seven beat funeral march in the first movement and the polychords in the strings in the last movement were only a few of the striking moments. I found a fair bit of Shostakovich in the piece, though with many more meter changes and other rhythmic asymmetries. The ending struck me as a miscalculation, the few pages that return to the quick tempo unconvincing after the soulful dissonances that provide what would have been a sufficient cap to the piece.

Throughout the evening, the orchestra sounded terrific with a fine command of the jazz aspects of all three pieces. It remains a mystery as to how Albany can do such important and polished work on a budget that is not just a shoestring budget, but a broken shoestring budget – the short portion of the string.

My photo above shows Maestro Miller on the left with composer Harbison after the concert.