I didn’t keep up with reporting on my concert going this past fall, but here is a first attempt to catch up with a few thoughts about some performances in the last several months.

– 11/8/17: Margaret Leng Tan at the Barnes Foundation. The big news here was the substantial new set of piano pieces by George Crumb called Metamorphoses. Modeled after Pictures at an Exhibition, the ten movements were suggested by various paintings, including works by Klee, van Gogh, Chagall, Kandinsky, and others. (It’s not the first time Crumb’s music was inspired by visual media as his A Little Suite for Christmas, A. D. 1979 was suggested by frescoes in the Arena Chapel.) While the new work doesn’t break ground stylistically, the piece embodied all the attributes we associate with this master: beautifully integrated extended piano techniques at the service of highly characterized expression; exquisite timbral sensitivity; faultless timing. Crumb returned to the theatrical use of the pianist’s voice in this work, and included a part for toy piano, a specialty of Ms. Tan.

While Margaret Leng Tan is an admirable artist, I can imagine an even more vividly compelling performance of the work with a greater dynamic range. George’s music needs to be larger than life, and that wasn’t always the case here. Perhaps the vast space in which musical performances at The Barnes take place played a role; perhaps the amplification of the piano needed to be more powerful. The magical spell cast by George’s music was impaired by the lengthy pauses between movements. Part of what makes the first two books of George’s Makrokosmos such an intense listening experience is that the dramatic tension is maintained throughout the entire piece. While it may be that George does not request the movements of Metamophoses to be played attacca, as is the case with the Makrokosmos sets, (I have not seen the score) it should still be possible to hold the listener in the aura of the work’s “otherworldly resonances” (to borrow the title of another work by George.) Helpfully, the Barnes briefly projected slides of the relevant paintings before each movement, but inexplicably replaced them with works by another artist that only vaguely related to the moods of George’s piece, leaving those images projected while the piece was being played. The Crumb work was preceded by one of Cage’s more boring prepared piano pieces and a few of Cowell’s pioneering works, with The Banshee standing out for its moody atmosphere.

I’m looking forward to tonight’s Philadelphia premiere of George Crumb’s Metamorphoses, a recent work for piano, played by Margaret Leng Tan. This takes place at the Barnes Foundation at 8 pm. Other events of interest coming up in Philly are the Network for New Music concert at the Print Center this coming Sunday, Nov. 12, with music by Cynthia Folio, Robert Maggio, Jeffrey Mumford, Roberto Pace, and Mario Davidovsky; and Orchestra 2001’s presentation of Steve Mackey’s Slide, Thursday, Nov. 16 (additional performances in Princeton on the 14th and at National Sawdust on the 17th.)

Alex Ross recently posted a list of concerts and operas he attended during a recent European trip. I haven’t been to Europe lately, but I did get to a memorable and varied series of concerts in Philadelphia recently. Here are some brief comments. 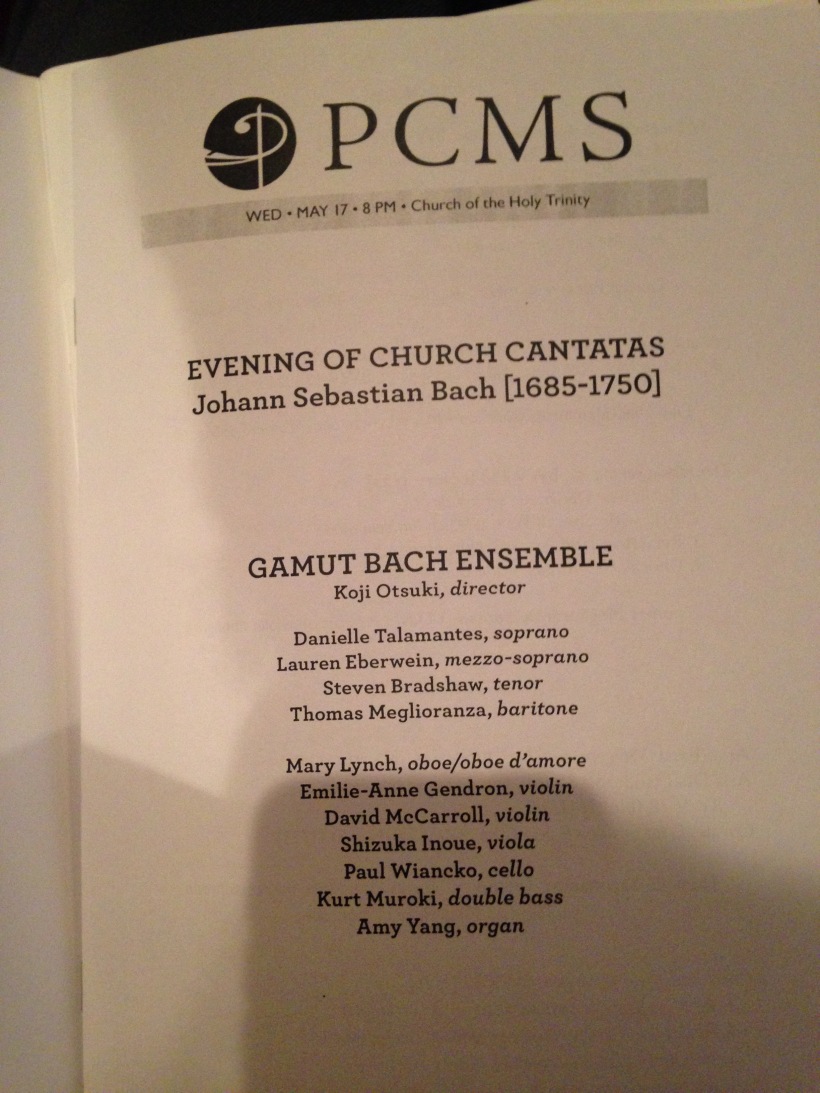 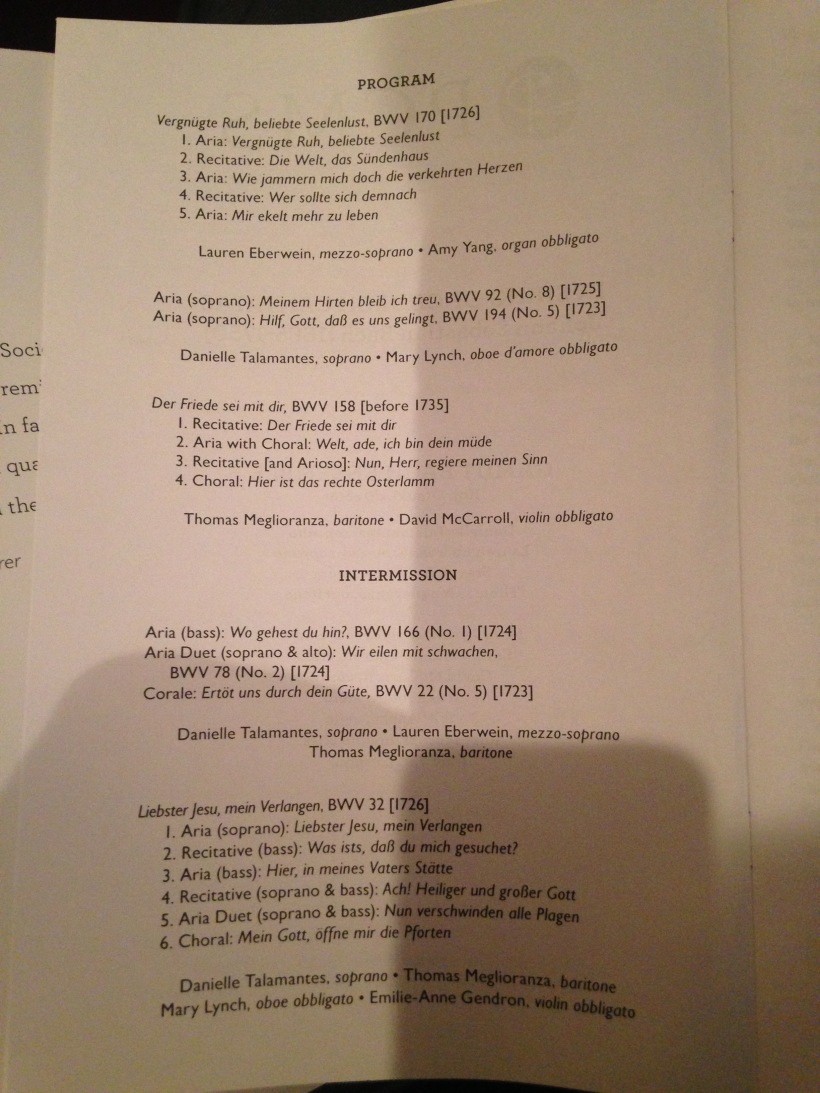 I was delighted to see the Church of the Holy Trinity filled for a program of Bach cantatas – it seats about 1100! Very fine performances, with the singers and obbligato players ably commanding Bach’s long lines. The second aria in BWV 170 is a contender for the strangest Bach aria ever, with the organ playing the obbligato while the violins in unison play the bass! 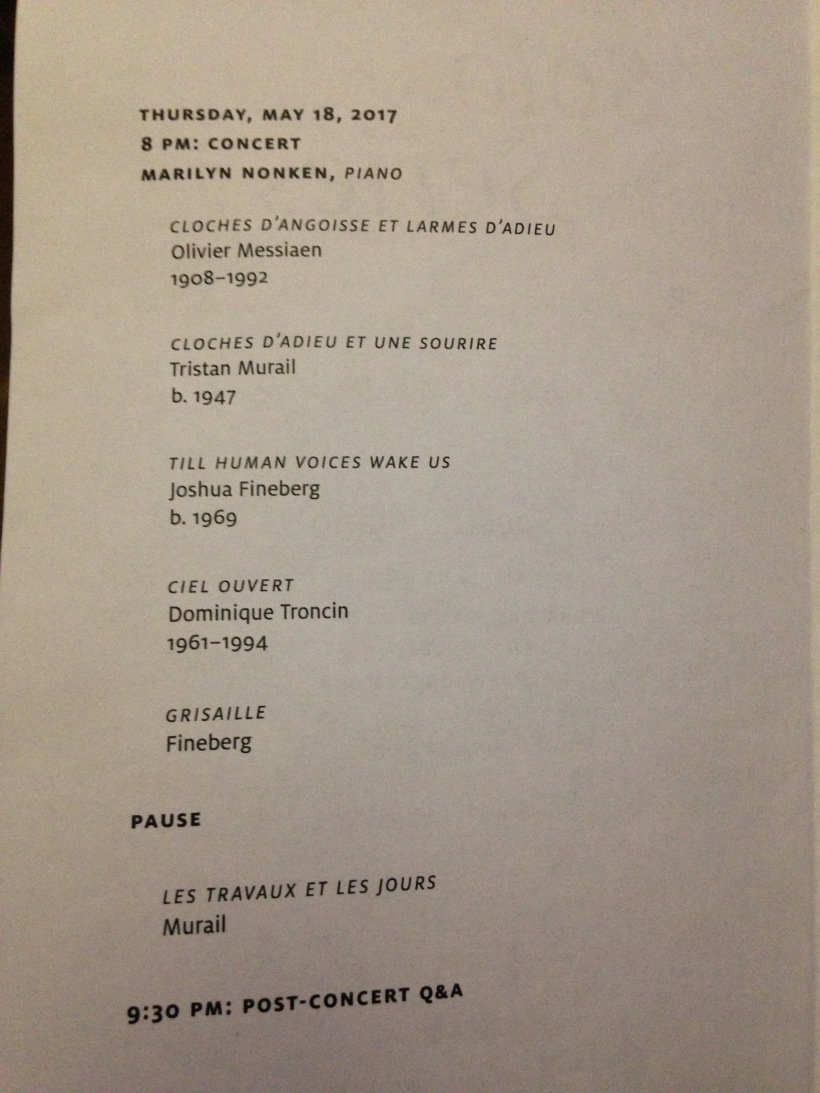 My favorite pieces here were the Murail works and the Messiaen. The latter was written on the death of his mother, while the former on the death of his teacher Messiaen; good to hear those in succession. The big hall at the Barnes is not ideal for every concert situation, but it worked for the spectralist pieces with their emphasis on resonance, sculpted in sensuous layers in Marilyn’s virtuosic performance. Here’s how the piano was set up, followed by a shot from the Q and A with Marilyn and Robert Whalen, co-artistic director, along with Katharine Skovira, of the concerts at the Barnes. 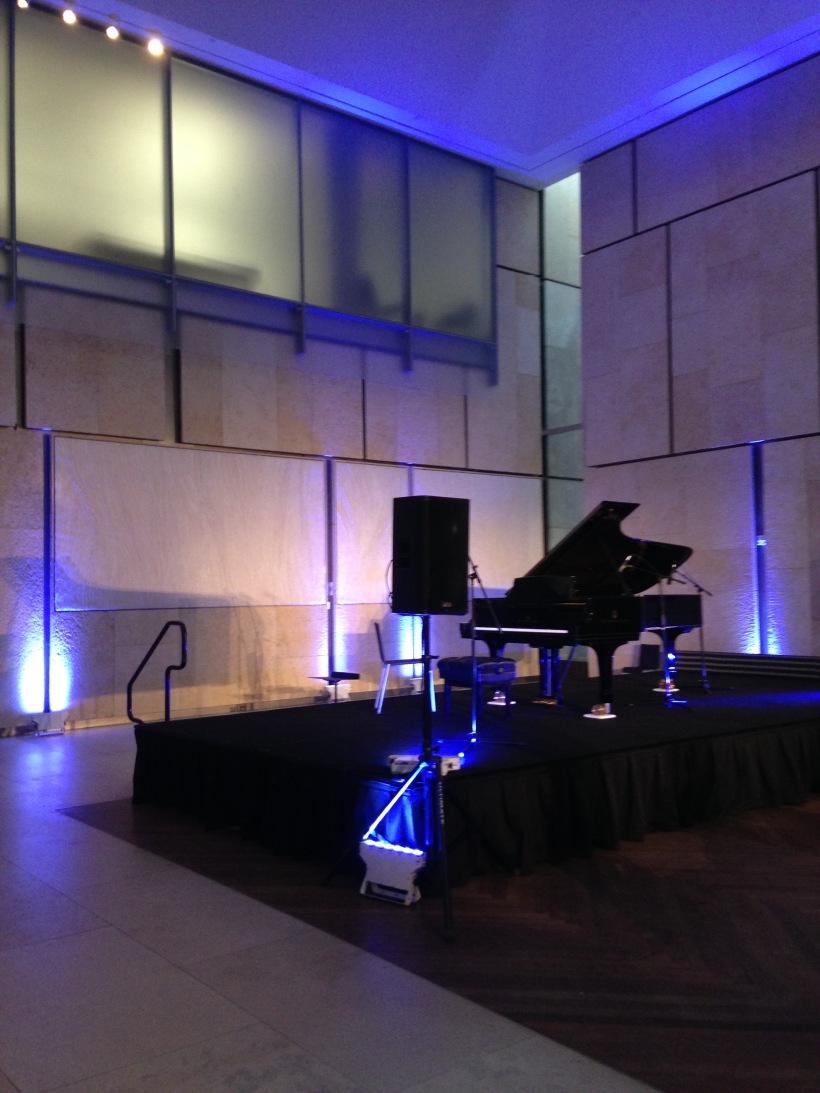 This was a magnificent performance of a staggering piece. Certainly hearing the orchestra in full cry was thrilling, but I was constantly struck by the intensely eloquent solo playing – trombone in the first movement, offstage “posthorn” (I assume played on trumpet?) in the third, to name just two of many. Karen Cargill’s voice was richly sonorous, and the choirs were splendid. Am I the only person who hears an echo of “I’ll be seeing you in all the old familiar places” in the cello tune of the finale? 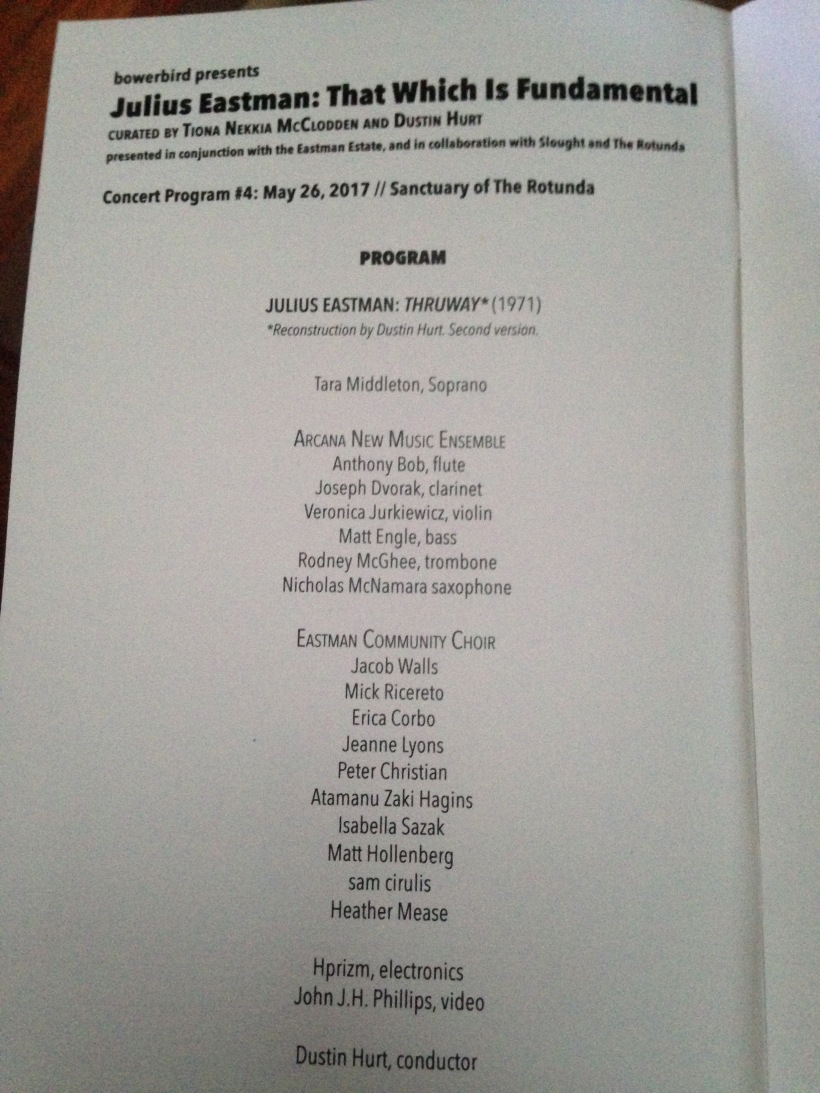 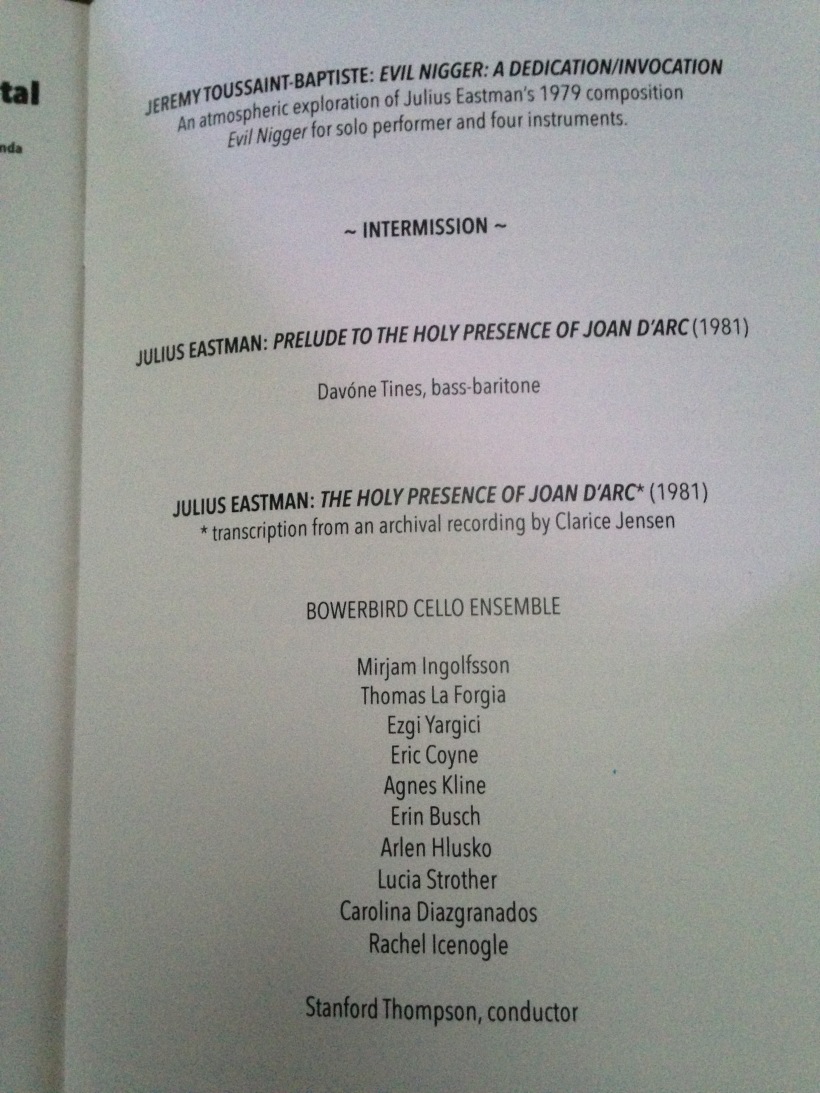 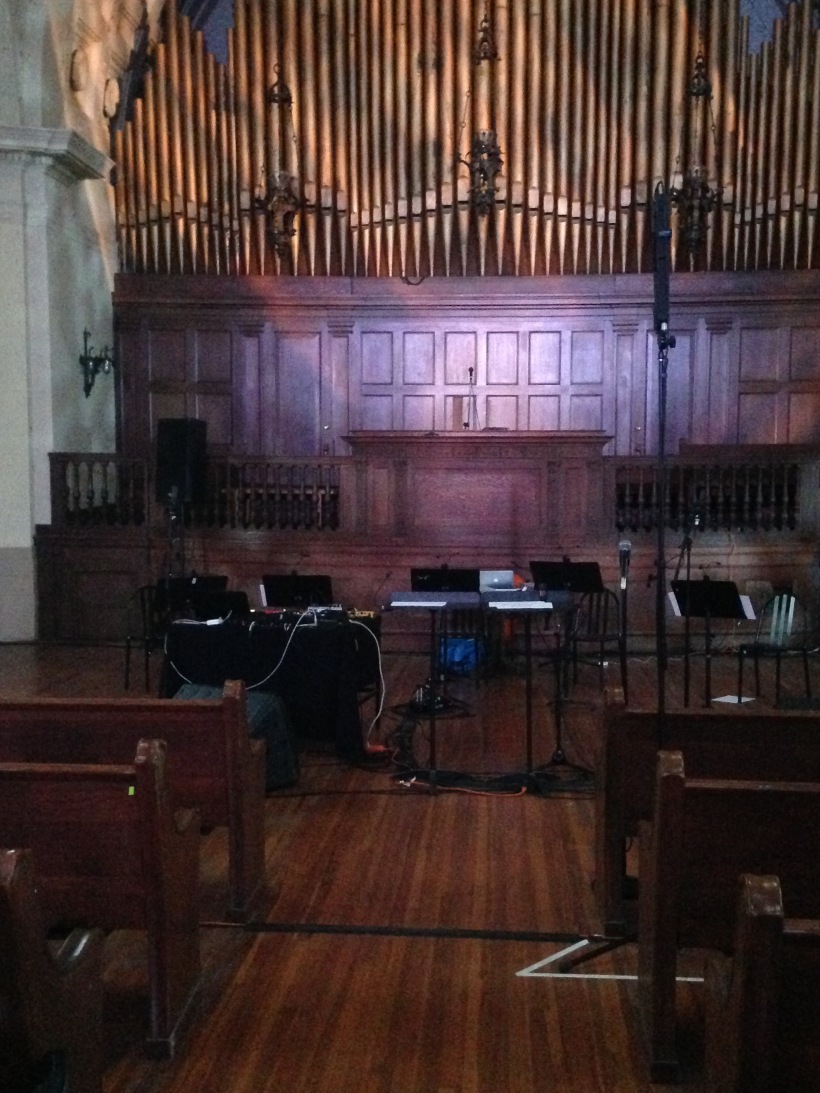 The ensemble pieces were intriguing, but the highlight for me was the a cappella solo performance of Eastman’s Prelude to the Holy Presence of Joan D’Arc by Davóne Tines. He was positioned at the lectern pictured above. His powerful bass-baritone cast an incantatory spell as he repeated the work’s few short musical phrases, a setting of this text:

The piece served as an invocation, and I sensed an unusual concentration in the audience; it was exceptionally quiet during the pauses between phrases, giving us a chance to attend to the reverberation The Rotunda offers.