Ellington: Such Sweet Thunder. I pulled out this album, surely one of the most distinguished of the master’s output for Columbia Records in the ’50’s, because I was re-reading David Schiff’s The Ellington Century, which includes a movement-by-movement discussion of the title work. As always with Ellington, the individuality of each player’s contribution, perfectly framed by the composer, makes up an astonishing orchestral palette. The CD version of the album includes a lot of bonus tracks, not all of which are at as high a level as the suite itself, but, of course, anything by Ellington is of interest. Do check out Schiff’s book, which is an intriguing take on 20th-century music history that puts Ellington at the center, rather than Stravinsky or Schoenberg, in addition to having lots of great insights on Ravel, Berg and more. I look forward to reading Schiff’s new book on Carter which has just come out. 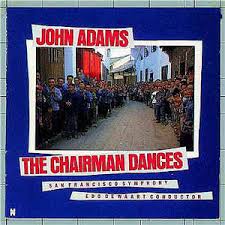 Adams: The Chairman Dances. San Francisco Symphony; Edo de Waart, conductor. This is a collection of orchestral pieces by John Adams, which I missed when it was released by Nonesuch in the late ’80s. In addition to the title piece, it includes Christian Zeal and Activity, Tromba Lontana, Short Ride in a Fast Machine, and Common Tones in Simple Time. I had only heard the widely-performed Short Ride and The Chairman Dances before. Short Ride is one of those perpetual motion concert openers that became a widely cultivated genre at one point; I think Chris Rouse’s The Infernal Machine is a more more finely shaped example of such a piece. My favorite piece on the album was Common Tones in Simple Time. The style of this 20-minute piece resembles that of the grand canvases of Harmonielehre and Naive and Sentimental Music, those symphonies in all but name that constitute Adams’ full integration of post-minimalist (maybe post-post-minimalist) materials with those of the romantic and early 20th century repertoires. Adams’ music plays such a prominent role in the American symphonic world; I think the interest on the part of younger composers in extended performance techniques and edgy idioms is in part a reaction against his work. It will be interesting to see if the pendulum swings the other way any time soon.