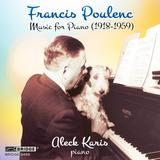 Yes, both composers are French, but they couldn’t occupy more contrasting places on the aesthetic spectrum. What’s consistent across these two albums is the high quality of the piano playing. Ponthus commands the extremes of Boulez’s piano writing with dazzling and heroic virtuosity. No heroism is called for by Poulenc, but the many short movements of these pieces do require deft characterization, only possible with Karis’s command of subtle and varied nuances.

Almost all of the 8 pieces on the Poulenc album were new to me, the one exception being the Trois Mouvements Perpétuels. The big pieces here were the most intriguing – a set of Fifteen Improvisations dating form 1933-59 and a Thème Varié from 1951. There’s more variety and weight to this music than just the charming cocktail piano of the Mouvements Perpétuels. (I used to play those as part of my piano bar repertoire.)

I’m afraid the astounding brilliance of Marc Ponthus’s playing did not change me into a big Boulez fan. I find the relatively late Incises (in its 2001 version) and the very early Douze Notations (1945) to be more attractive than the three sonatas. The shattered narrative of the Third Sonata – like handfuls of multi-colored glass shards – simply doesn’t sustain my interest. The Second Sonata has become something of a repertoire piece, but if you are looking to program a big mid-century atonal piano sonata I would suggest the Sessions 3rd, Rochberg’s Sonata-Fantasia, Wolpe’s Battle Piece (a sonata in all but name), or, dating from a little later, the Wuorinen 2nd, or the two sonatas of Richard Wernick (only the First seems to be on YouTube), all much less widely played works that appeal to me more than the Boulez sonatas.