I’m back now from hearing two performances of my Oboe Quartet as well as one of a choral piece at locations in Boston and New Hampshire.

That shot was taken on Saturday morning before I strolled over to Emmanuel Church:

where I attended a rehearsal of my motet One With the Darkness, One With the Light. Ryan Turner conducted this short piece, scored for treble voices only. (Sorry, I don’t have everyone’s name!)

Later that day I was in Peterborough, New Hampshire to hear Peggy Pearson, oboe, and the Apple Hill String Quartet (Elisa Kuder and Colleen Jennings, violins; Michael Kelley, viola; and Rupert Thompson, cello) play Haydn, Brahms, and my new Oboe Quartet, a Winsor Music commission. The performance was in Bass Hall, a handsome room in the Monadnock Center for History and Culture. (More about their playing below, in connection with their Brookline performance.) I visited a park a short walk from the center while waiting for my takeout dinner from the Peterborough Diner (I recommend the onion rings).

The motet went very well the next morning at Emmanuel. The performances there are consistently strong, but in this case the brevity of the piece and the use of just the treble voices yielded an exceptionally focussed and detailed performance. By a curious bit of synchronicity, the sermon preached by Rt. Rev. J. Clark Grew made mention of Wendell Berry, a reference Rev. Grew told me later was written in without him knowing that my motet setting a Berry text would be heard that morning. (photo: Elizabeth Richardson)

Spring – and the Easter season –  was making itself felt inside Emmanuel, in the form of huge paper or maybe fabric flowers suspended over the nave:

It was nice to see John Harbison at the service (photo: Elizabeth Richardson): 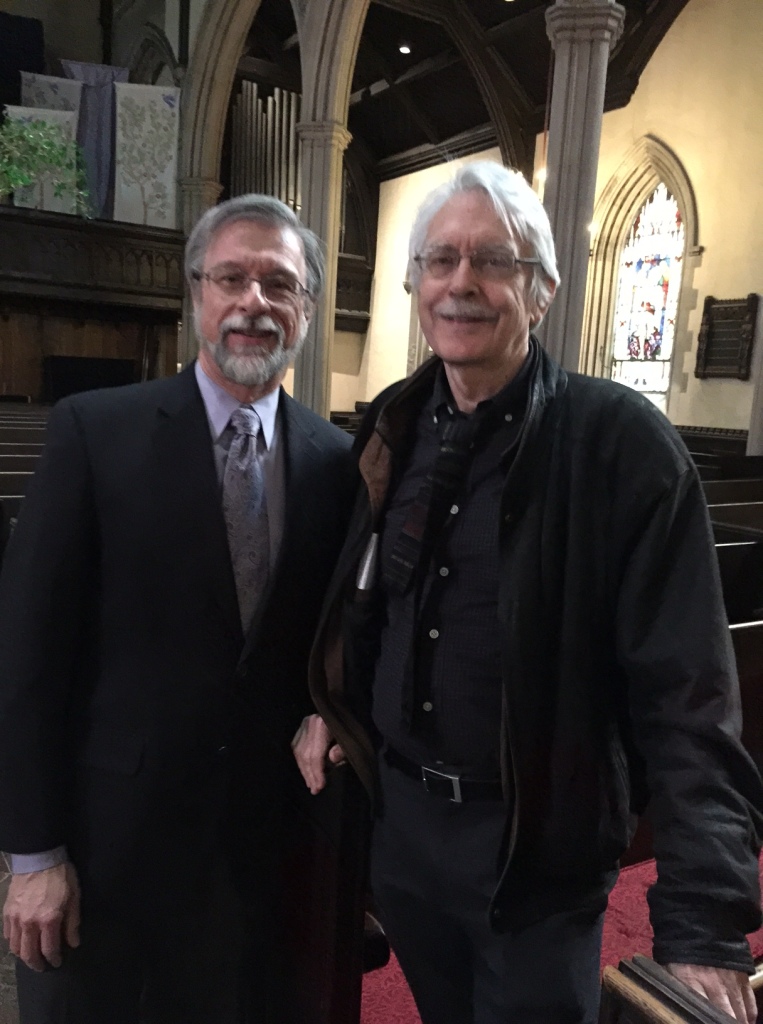 There was a full house at St. Paul’s in Brookline for a reprise of the previous night’s concert, the last in the Winsor Music Chamber Series for the season. The Haydn was a transcription of Symphony No. 97 that included oboe with the quartet. I thought the arrangement worked well, and especially enjoyed the warm, fluent bass playing of Lawrence Wolfe, who was not at the NH performance. This was now the third time out for these players in my new quartet, and though they sounded great at the premiere, now they had even greater command of the piece. It was a passionate performance, well-received by an audience that filled the church. After intermission there was one of Winsor Music’s “Song for the Spirit” commissions, a brief hymn-like setting of Emily Dickinson’s “Hope is the thing with feathers” composed by Eric Nathan, and intended for audience participation, though mezzo Katie Hoyer’s demonstration of the tune was so lovely that it might have made a few of the listeners hesitate to add their voices on the second go-around. The Brahms Quartet in A minor closed the program, in a performance memorable for its long sweeping lines and elegantly shaped details. Here’s a picture from the reception after the concert (L to R: Mike Kelley, Elise Kuder, myself, Peggy Pearson, Rupert Thompson, Colleen Jennings):

The next morning there was a cardinal outside my window, waiting to say goodbye: 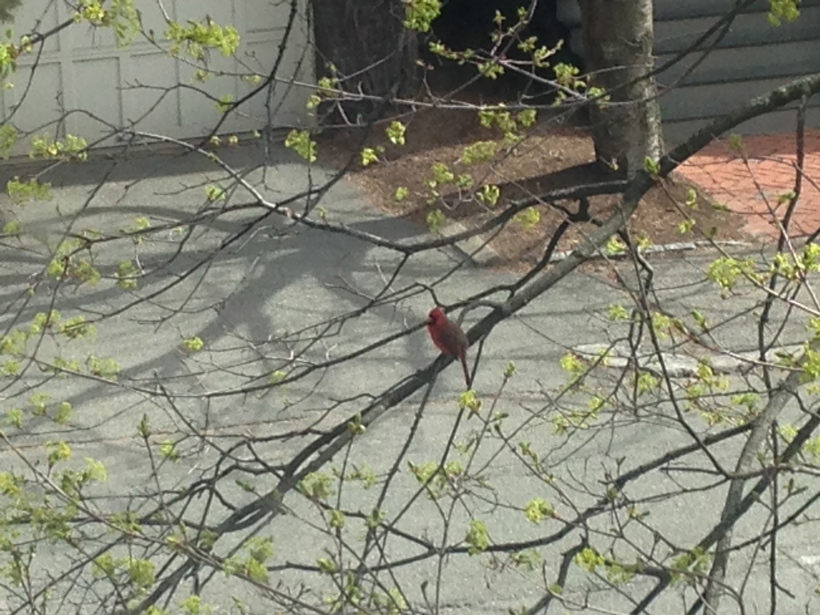 I’ll be hearing Peggy do the quartet again on June 18, this time with a different group of string players, at the Chesapeake Chamber Music Festival.

One thought on “Three Performances in New England”