Here’s a program note on the Leonard Stein Anagrams by John Harbison that I will be playing on this Wednesday’s concert with Linda Reichert at U Penn: 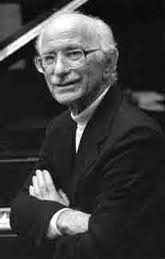 Pianist, conductor, teacher, and longtime assistant to his mentor Arnold Schoenberg, Leonard Stein (1916-2004) (pictured at left) was an important presence for new music in Los Angeles for decades. He directed the Arnold Schoenberg Institute at USC from its founding in 1975 until his retirement in 1991. In 1994 Stein founded the recital series Piano Spheres, and it was for this organization that John Harbison wrote his Leonard Stein Anagrams. Gloria Cheng played the premiere in 2009. (Note that the last movement is labeled “12A” because of Schoenberg’s (and Stein’s) triskaidekaphobia.)

It has been a privilege, melancholic and joyful, to make these Leonard Stein Anagrams for Piano Spheres, a chance to reflect on a rich twenty-year friendship.

Leonard Stein was a direct link to Schoenberg, and to all of the performers and composers of the Second Viennese School. He was also constantly alert to everything that was happening in concert music bringing his wit, critical intelligence, passion, and high standards to bear, in his disarmingly informal style. Just his voice on the phone could make the day—when he called to celebrate his mutual birthday with Rose Mary Harbison, or just to report west-coast news, with his unique blend of enthusiasm and scepticism.

During one of his appearances at the Token Creek Festival, Leonard was delighted to discover our tradition of making anagrams from names of the summer’s composers and performers. Leonard Stein (and Arnold Schoenberg) yielded nice results. When I began this piece, I found, in Leonard’s hand, six of them, based on his name, which he had discovered the old (pre-computer) way, repositioning the letters, crossing out each one he’d used. Naturally, I’ve used all six of his “finds” in the piece. At least four interesting ones didn’t go in, held perhaps for another piece.

These short movements, which are interrelated, use no letter-to-pitch correspondences. They react to the movement titles, assembling fleeting images of Leonard, present and absent.