Mary Mackenzie’s recital at Penn last week featured several pieces by Penn faculty, both current and retired. She opened with the Three Early Songs of George Crumb, and I mean early – these were written when George was still a teen, intended for his wife Liz to sing. (Come to think of it, I don’t know if they were married at the time, or still just high school sweethearts.) Although George denies it, there are hints of his mature idiom here, and not just in the nocturnal cast of the texts and settings. There is a moment in the second song where the piano pedal is held down while a repeated figure is played softer and softer. That use of resonance, a resounding, echoing effect, is an essential thumbprint of Crumb’s music, part of the acoustic of his native West Virginia landscape, with sounds reverberating amid the hills and valleys.  Mary offered more Crumb in the second half of the concert, his little Poe setting, The Sleeper, which was written for a Jan DeGaetani Carnegie Hall recital (I was there!)*

There was more music by Penn emeriti as well, both pieces from the late 60s. George Rochberg’s Eleven Songs sets short texts by his son Paul. It was Paul’s early death that led George to reconsider his aesthetic outlook and reject serial technique, while embracing a broad range of musical possibilities, including 19th century tonal practice. While he never engaged serialism again, George still did write atonal music, such as this set of songs. This was fiercely expressionist music, full of vivid gestures and often anguished in tone. To me the piece sounded somewhat dated; some of the gestures may have carried a certain amount of shock value fifty years ago, but piano clusters and sprechstimme vocal effects don’t in themselves mean a great deal. They can’t make up for a piece’s lack of substance. The set dragged, and although they are short songs – and were well-performed – they felt long.  In contrast, Richard Wernick’s Moonsongs from the Japanese, did seem to me to hold up. The piece is written for soprano and two pre-recorded sopranos (though it could, I suppose, be performed by three sopranos.) These settings of short haiku-like poems were concise in a way that the Rochberg songs were not, and although they too were of their time in the use of non-synchronized passages and non-pitched phonemes, these devices felt integrated and did not call attention to themselves in the way that the special effects in the Rochberg did. The use of pre-recorded female voice, the exploration of phonemes and the wide-ranging melodic gestures brought Babbitt’s Philomel to mind, though the pitches made sense in Wernick’s piece in a way that, for me, Babbitt’s pitches do not. Moonsongs was written for Neva Pilgrim, and when I heard a dub of the tapes Neva had made for the piece decades ago, I knew the sound quality would not be acceptable, so Mary and I made a fresh version of the tape. Her astonishing virtuosity meant this was not a lengthy job; only a few takes were needed for a given section. I would like to go back to the materials and polish my editing of the piece a bit, but we managed to get something together that was quite effective.

The one non-Penn composer on the program was John Harbison. Mary’s performance of his Simple Daylight, six songs on texts of Michael Fried, was harrowing. It was an interesting contrast with the Rochberg – there is anguish in both pieces, but there is much greater musical substance in John’s piece. The emotional power of the piece springs directly from it’s detailed craft. It’s one of John’s darkest pieces, and one of my favorites.

Mary closed the program with a complete performance of my cycle Holy the Firm. Singing from memory, she vividly conveyed the ecstatic and contemplative aspects of the piece, with full command of the mad scene that is the final song. H the F will be on the upcoming Bridge CD, in its chamber ensemble version, as performed by Susan Narucki. I’ve been very lucky with performers of this piece, and Mary Mackenzie’s performance continues that lucky streak.

Eric Sedgwick was Mary’s unflappable pianist. As someone remarked to me, “he’s one of those Zen guys”, meaning Eric is the kind of pianist who works wonders while appearing to barely move. The piano part for Holy the Firm is very notey, and Simple Daylight is intricately worked, but no problems were posed for Eric. He is the kind of player whose trills – fast and wonderfully smooth – are played purely with the fingers; no helpful forearm rotation required. He partnered Mary impeccably.

I am writing this after my return from Cornell where Pure Contraption, Absolute Gift was performed – more about that in my next post. 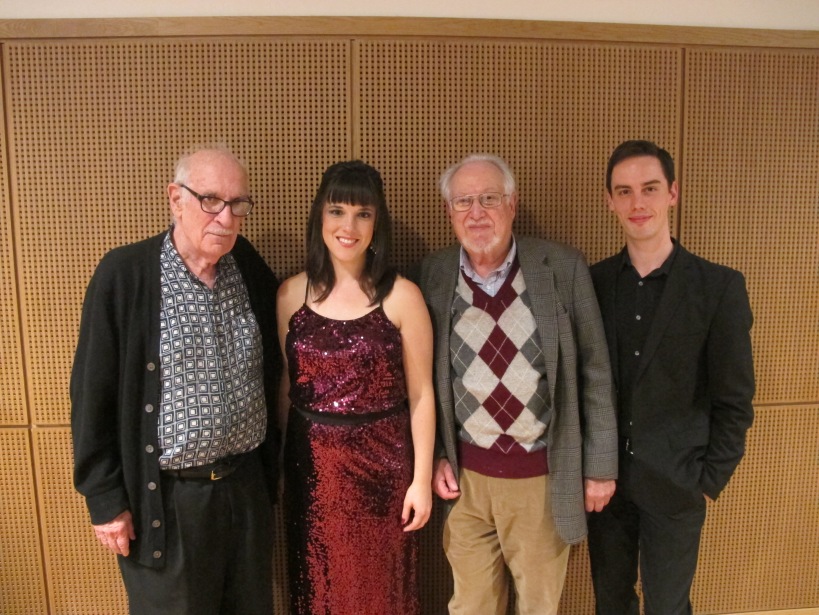 * Not only was I there, but this was the occasion for one of those only-in-NYC moments: I got in the elevator to go find Jan and the composers whose songs she had premiered that night. In the elevator with me were Teresa Sterne (the force behind Nonesuch records in those days, including Jan’s unsurpassed recording of Ancient Voices) and Issac Stern. Ms. Sterne asked Mr. Stern the following question: “Is it true that you once received a review that said, ‘He left no tone un-Sterned’?” The answer was yes.