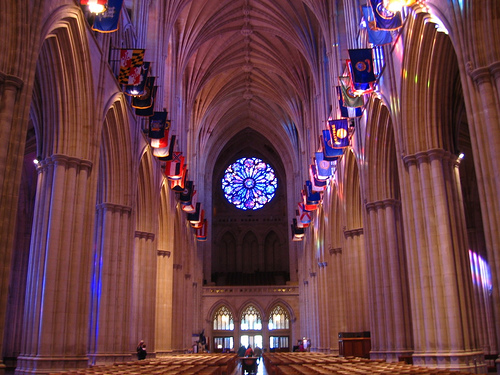 A few weeks have passed since the announcement, but I have not been posting very much lately (end of the year busyness at my day job, combined with trying to get some composing done), so I am only now sharing with you the news that the 21st Century Consort has received an NEA grant to support the recording of my Sacred Songs and Meditations. My program note on the piece follows. The plan is for a performance of the piece next summer, to be followed immediately by recording sessions. The album will also include Stephen Albert’s Cathedral Music and Christopher Patton’s  Out of Darkness, with all three pieces receiving their first recording. Heartfelt thanks to the director of the Consort, my dear colleague Christopher Kendall who has been a tremendous supporter of my work over the years.

When Christopher Kendall asked me to create a piece for his two consorts (the Folger and the 20th/21st Century)  to play together, I knew immediately that I wanted to accept, even though I was already booked this past year with commitments both professional and personal (the birth of our twins!). I had been lucky enough to have both these splendid groups perform my music separately in the past, and the idea of a “millennial” piece that both groups would perform together was too good to pass up. But there was no way I could meet the deadline for the piece if I was to create something from scratch.

I dealt with my time constraints by eventually settling, with Christopher’s encouragement, on a set of arrangements of already existing pieces. Christopher had long wanted to perform my Four Sacred Songs — arrangements of old sacred melodies for soprano and performers on modern instruments — so what developed was a piece that would incorporate the Four Sacreds  (with parts added for early instruments), interwoven with a set of instrumental pieces that would feature the early instruments, occasionally supplemented by the modern instruments. The instrumental movements are arrangements of earlier pieces of mine, drawing on music used in a string quartet, a work for organ, and even an orchestral suite. (I put aside any guilt about concocting a ragbag of arrangements when I recalled that music with a flexible instrumentation performable in multiple realizations is very much in keeping with the musical practice of earlier times that the players of the Folger bring so beautifully to life.) This new set is thus a kind of summary of my preoccupation with making music based on old sacred melodies, an interest that goes back to the Three Sacred Songs of 1989, and continues through a number of compositions throughout the nineties for various ensembles. My work as a liturgical musician is the real source for this preoccupation, for it was in working as a church musician, principally in New York in the eighties, that I got to know most of these melodies. This new composition, like its predecessors, represents a uniting of my work as a liturgical musician with my work as a composer of concert music. This union is vividly symbolized both by the sacred space in which we hear the piece today and by the contribution of the Cathedral Choir, giving us a taste of the melody on which each movement is based before that movement is played.

Here are some notes on the individual movements:

The musical substance for this piece began as a simple choral arrangement which I later plundered for my String Quartet #2. I had thought I would have Latin titles and texts for all 8 movements of the Sacred Songs and Meditations, but a scholar friend informed me that the 19th century text for this piece is based on a Greek hymn dating back to the 5th century and there is no Latin to which we can return! The tune is a traditional French melody known as “Picardy” that dates from the 17th century.

This movement retains the original scoring for modern instruments as in the Four Sacred Songs. The text is attributed to St. Bernard of Clairvaux, the great Cistercian monk and preacher and is set to a chant melody.

My setting of this Eucharistic hymn draws on both the modern and ancient instruments and is based on a movement from my orchestral suite of Five Meditations on old sacred tunes. The music, perhaps the darkest portion, harmonically speaking, in the whole cycle, reflects the deep mystery of subject dealt with in St. Thomas Aquinas’s text.

“Of the Father’s Love Begotten” is the usual English title for the hymn on which this piece is based; the title comes from a 19th century translation of the original fourth century text. The chant melody is from the 13th century. I have set the tune using a somewhat free version of the medieval technique known as a mensuration canon: except for a few freely imitative phrases, all the parts have the same melody, but played at different speeds.  For example, the low cello, viol and harp notes mark out the tune at a pace six times slower than the voice.

My best efforts failed to come up with the Latin original for this 15th century office hymn and the choir will sing a verse in the English translation by John Neale from the 19th century. The title literally means “form of heavenly glory” and the hymn speaks of the mystery of the Transfiguration of Christ. The tune is the Agincourt Song, the same 15th century melody used by Walton in his music for Henry V. This arrangement, exclusively for the old instruments, is based on another movement from my Five Meditations.

The chant “Christus Factus Est” appears in the Liber Usualis  as part of the Holy Week liturgy; the melody is unusually wide-ranging and highly melismatic.  The text is part of St. Paul’s famous “Philippians Hymn”, and speaks of the mystery of Christ’s suffering and exaltation.  The first setting I did of this melody was for voice and piano, with the long ringing piano notes evoking the resonances of a great sacred space – it is a kind of homecoming now to hear this new arrangement in a space of the kind that inspired the original conception.

Based on an organ piece I wrote for the rededication of the organ at St. Meinrad’s Archabbey in Indiana, this movement employs several sources: the refrain (in slightly modified form) and verses of Christus Vincit (Christ Conquers) and a hymn called Vexilla Christus Inclyta (Raise Christ’s Banner).  The former is a very old melody, said to have been sung at the coronation of Charlemagne; the latter is a modern conflation of older text and melody probably devised by a monk of Solesmes.

The origins of the tune for “O Fillii” are obscure, and may be secular in nature. (One friend suggested to me that the tune is a medieval drinking song that “got baptized”.)  The words date from the 14th century and somewhat discontinuously narrate the Easter story, closing with a call to give praise and thanks to God.

(photo: interior of the National Cathedral)