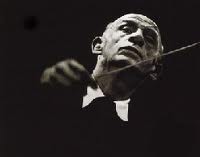 In 1944 Mitropoulos had programmed, on one of those summer Carnegie Hall concerts, one of his specialties, Rachmaninov’s Second Symphony… At one of the more climactic moments in the Symphony’s first movement, a series of heroic, fanfarelike fortissimo calls are initiated by the horns, followed by canonic responses in other brass and woodwind instruments. It is always a hair-raising moment, especially if you are sitting in the orchestra, enveloped by the full acoustic onslaught of the music. But Mitropoulos raised the experience to a maximum, almost terrifying level, and with an unimaginable intensity that I had never witnessed before. As he turned to the horn section, his deep-set blue eyes shone with an extraordinary clarity; they seemed to be on fire. Moreover, suddenly the skin on his bald head, shiny with the reflected glow of Carnegie Hall’s ceiling lights, began to move, crawl back and forth across his pate. I could hardly keep playing; it was such an amazing sight. But, believe it or not, when the horn fanfare is repeated a few bars later, but now a minor third higher, with even greater intensity, Mitropoulos’s eyes crossed!

– from Gunther Schuller: A Life in Pursuit of Music and Beauty, Gunther’s fascinating memoir.

One thought on “From the Reading Journal, #13”