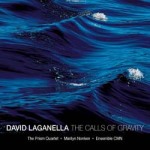 David Laganella has released a disc on the New Focus label entitled The Calls of Gravity. The composer writes that the title “is a reference to a technique that is prevalent in many of my works in which musical objects are attracted towards each other, some objects with greater mass than others.” This plays out in music that is more interested in fierce gestures and active textures than melody or harmonic progression. In Leafless Trees, The Prism Saxophone Quartet creates molten sound images, with bent pitches, carefully shaped vibrato and alternately frantic and static gestures. The deformations of sound that make sax piece so striking are less accessible on the piano, and The Hidden River is less successful for it. I found The Persistence of Light, the second of the two piano pieces on the disc, to be more effective because of the clarity of the dichotomy between aggressive and lyrical modes of expression. Sundarananda, a trio inspired by woodworker George Nakashima, is the exception to the aggressive tone that predominates on the disc, being gentler and more lyrical, with hints of folk melody. Laganella has enlisted some superb performers here, including Ensemble CMN, but especially Prism and pianist Marilyn Nonken who bring plenty of fire to their performances.