Although I have a catalog of more than a dozen choral pieces, I don’t think of myself as a choral composer, at least not the way some folks are who work almost exclusively in the choral medium. Yet I seem to be in the midst of a time very much focussed on choral music. My most recently completed piece is from this past April:  Journey, a Meister Eckhart setting for men’s chorus written for inclusion on a CD of my choral music being recorded by The Crossing. The album will include a short piece for women’s voices, setting a Wendell Berry text, so I thought a piece for just the men would balance the Berry setting and offer a welcome variation in texture in the context of the whole CD which is mostly for mixed chorus.

In late June, I attended the annual meeting of Chorus America, which took place here in Philly. I’ve never been to a conference of this kind, not Chorus America, not Chamber Music America, nor the League of American Orchestras. My hope was to connect with conductors and try to get them to consider my music for possible performance. I did meet some folks, all quite gracious, but it remains to be seen whether anything will come of it. I’m glad I went to the conference, though I don’t think I would have gone to it in another city, what with the cost of travel and lodging. But because the meeting was here in Philly, I would have been annoyed with myself if I did not give it a try. The conference featured amazing performances by the Mendelssohn Club of Philadelphia (Tan Dun’s Water Passion – some striking ideas but essentially tedious and thin) and The Crossing (Kile Smith‘s big Robert Lax piece, rich-textured and imaginative, at times a bit on the minimalistic side – and just issued on CD.)

This past week there were five days of recording sessions for the CD mentioned above. The Crossing is extraordinarily virtuosic, both as individual singers ( Mass for the Day of St. Thomas Didymus calls for a schola of four soloists, and there are many smaller solos in most of my choral pieces – click the link for video of the premiere), and as a group, with stunning unanimity of articulation, timing and intonation. Donald Nally, the conductor and artistic director of the group, has truly exceptional ears, and was constantly challenging the group to greater refinements of detail. Paul Vasquez, the recording engineer, was a pleasure to work with, and I am grateful to Kevin Vondrak and everyone else who made the recording process go smoothly.

We recorded in a handsome renovated barn on the campus of St. Peter’s Church in the Great Valley, an Episcopal church in Malvern, PA. 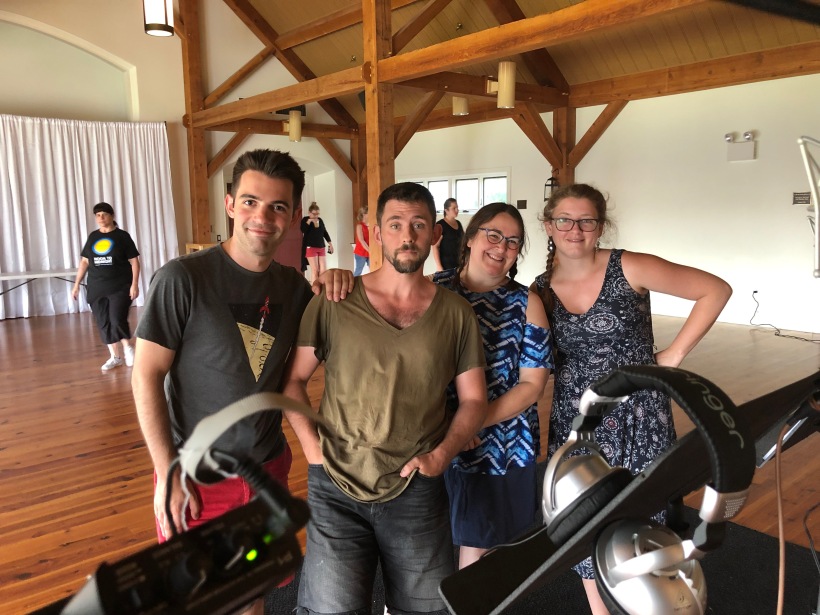 The choral focus continues for me with my current projects. I am working on a short piece for the Pennsylvania Music Educators Association District 11 Chorus, an honor choir of high school students selected from various schools in southeast Pennsylvania. This will be premiered next January 18. I am working with a text written specifically for the occasion by my friend Susan Stewart, who texts I have set in four previous pieces. I am also sketching a piece in response to a commission awarded by the Riemenschneider Bach Institute at Baldwin-Wallace University to honor the Institute on its 50th anniversary. This is set for a first performance in April of 2020. My plan is to use a chorale tune employed by Bach, “Von Gott will ich nicht lassen”,  as the basis for a chorale fantasia. I am researching the secular roots of the tune, and the many pieces based upon it by various composers. In fact, I used the tune myself in my work for sextet and tape, Sacra Conversazione, and I suspect the post-tonal harmonization it received in that piece will find its way into this new work.

Sometimes Twitter is good for something. It was there that I came across an excerpt from Meister Eckhart’s Book of the Heart by Jon M. Sweeney and Mark S. Burrows. The book consists of what you might call poetic realizations of excerpts from the writings of the great 14th century mystic. It wasn’t long after I got my hands on the book that I found a text I knew I wanted to set. Sweeney and Burrows title the poem Your Soul’s Delight:

There is a journey
you must take.
It is a journey without destination.
There is no map.
Your soul will lead you.
And you can take nothing with you.

This past Holy Thursday I finished setting the text for men’s chorus: just a two-part texture, very simple, quiet, intimate. Here’s how it starts:

There is no public performance of the piece planned yet, but The Crossing will include the work on its upcoming all-Primosch CD. This short piece for just the men of the choir will balance nicely with a two-part setting of a Wendell Berry text for just the women’s voices that will also be on the album. The remaining music will draw on the full group, and will include the big Mass for the Day of St. Thomas Didymus that I wrote for The Crossing a few years ago. Here’s a video from the premiere of that piece: